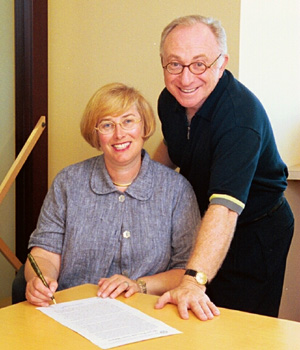 Bryan and Susan sign their Endowment Book of Life story 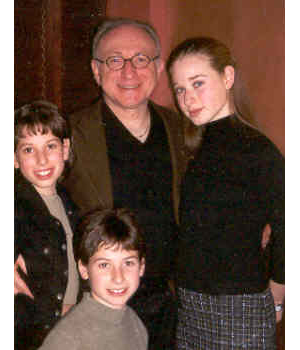 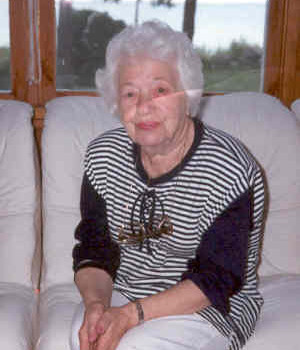 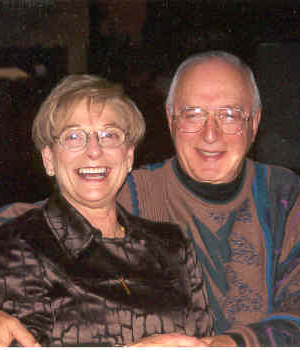 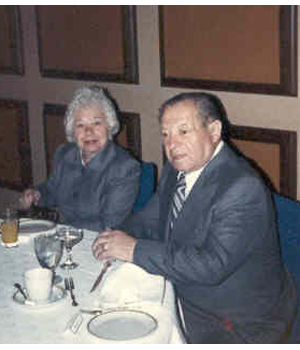 In 1983 Bryan Klein married Susan Halprin and a few years later they started their family of three daughters, Baillie Rae, Sarry Nell and Julie Cara. How they got together however is a longer story. Bryan was born in Winnipeg. His early childhood was spent in Kelvington, a small Saskatchewan town where he lived with his mother Bea, his father, Harry and his older brother, Bill. For the first 10 years of his life, his memories are of his father, Harry, being a successful merchant in the thriving small farm town. He lived in a home with none of the amenities of city life, such as running water or indoor plumbing. He remembers the weekly bath with his brother Bill in a tin tub on the kitchen table while listening to Lux Radio Theatre. These recollections are in sharp contrast to the lives of his children and all their 'creature comforts' in Winnipeg.

Realizing the importance of a Bar Mitzvah, Bryan's parents sent Bill to Winnipeg in 1952 and the rest of the family followed in '53. Settling on Elm Street Bryan attended all the local schools as well as the evening Hebrew program at the Shaarey Zedek. His memories of Bar Mitzvah parties, the Triton club and Saturday night dances at the Hargrave Street Y were all positive. Bryan was chairman of the first Red River Region BBYO convention. After graduating from Kelvin, where he was told that his voice was not good enough for the Gilbert & Sullivan glee club, he went on to University where he performed in numerous Broadway musicals and along the way earned arts and law degrees and then a Masters degree at the University of Toronto Law School. A practicing lawyer since 1968 he is proud of the fact that he is a life-bencher of the Law Society of Manitoba and a past president of Versatec, an organization dedicated to assisting the mentally handicapped to achieve a fuller life by providing meaningful full time employment.

Bryan is proud of his parents and how they lived their life, his father Harry coming from Pjusk, Poland to Saskatchewan where he was a homesteader with his father, leaving the farm to become a merchant in rural Saskatchewan, then coming to Winnipeg and eventually owning the Empire Hotel. Bryan's mother, the Winnipeg born Bella Abramovich was ahead of her time as she was born at home because the family could not afford the hospital fee and therefore her birth was never registered. He would like to be remembered for his sense of humour.

Susan Halprin is a lifelong Winnipeger, one of three children born to Ken and Elyse (Samuels) Halprin. Susan's father has had a long history with The Jewish Foundation of Manitoba and her paternal grandfather Joseph was one of the original founders of the Foundation. Susan speaks proudly of the tradition that her family has established. Susan remembers her childhood as being safe and secure. Walking or taking the bus to the local school or Hebrew classes at the Shaarey Zedek was a daily routine. She lived, surrounded by friends and family, both during the year in the city and in the summer at Winnipeg Beach. The beach is filled with some of her fondest memories. This was the summer "melting pot" that brought all of her neighbouring friends and the friends that she made at the YMHA into close proximity. Thoughts about the clubs at the Y, JYO at the Shaarey Zedek, and the Gabriels chapter of BBG are all experiences that she remembers fondly. Susan also remembers walking hand in hand with her sister and her cousins all holding hands with grandmother "Nanny" who described her granddaughters as the jewels of her human bracelet.

Before settling into the task of raising three daughters, Susan taught pre-school in Washington D.C., Minneapolis and at the Hargrave Street YMHA. She has donated her energies to the Jewish Federation of Winnipeg and to the "meals-on-wheels" program. Her wish for her children and for future generations is that Winnipeg continues to thrive as a city and to provide them with a vibrant and vital Jewish community. Susan hopes to be remembered as a loving wife and mother.