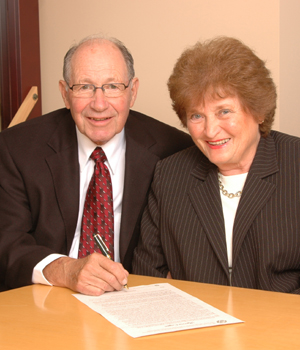 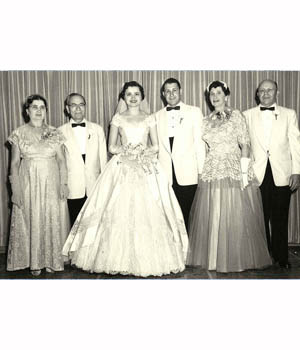 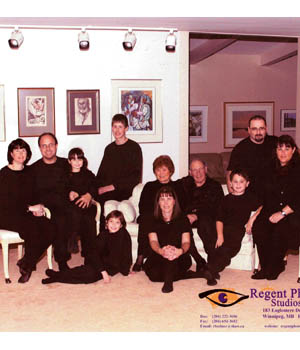 Brownie and Harold with their children and grandchildren

Brownie and Harold Fleishman have been ardent supporters of the Jewish community of Winnipeg, following the example set by their parents, giving both time and money to the betterment of the community and of Klal Yisrael.

Benjamin Pierce, Brownie's father, emigrated from Russia in 1912 and her mother Esther (Neaman) followed in 1914 with their two sons, Moe and Fred. Benjamin was a hard worker who established the Pierce Fur Company. Esther was a homemaker and an active volunteer in the community. The Talmud Torah's Muter Farein was the focus of Esther's volunteerism.

Jacob (Jack) Fleishman, Harold's father, and his mother Ray Klasser separately emigrated from Russia in the early 1900s. They met and married in Winnipeg. Jack was a respected businessman as the owner of City Clothing and Pawn on Main Street where the Pantages Theatre now stands. Jack and Ray were active in the Jewish community - Jack, for the World Jewish Congress and as an active board member of the Sharon Home during its development, and Ray, in Hadassah and the I.L. Peretz School Muter Farein.

Brownie attended the University of Manitoba and then worked as a receptionist and secretary for her brother, Dr. Moe Pierce. In the summer of 1953, she met Harold who was a dental student at the University of Toronto. Harold graduated in 1954, joined his cousin Harry Gelfant in practice at the East Kildonan Dental Group, became a member of Glendale Golf and Country Club and, a year later, married Brownie. In 1969, when Harry left for B.C., Harold took over the dental office and expanded it to include other dentists and hygienists. He then focused his practice on crown and bridge.

Brownie was community minded from an early age. As a child, she went door to door with the JNF box. She was active in Young Judea and the YMHA during her pre-teen and teenage years, and Hillel during her time at the University of Manitoba. As a newlywed Brownie became involved with Israeli Chapter of Hadassah, becoming its president and chairing several fundraisers for the organization. She was a JNF Board member for many years and arranged several of its Negev dinners. She also co-chaired the Combined Jewish Appeal Women's Division. Getting young women involved in the campaign has always been her passion. Brownie also has been involved in many other community functions. In 2000, she was awarded the Max and Mollie Shore Memorial Award for dedication to the Jewish Federation of Winnipeg and, more recently, received special recognition from the Combined Jewish Appeal for her years of service.

Throughout his life Harold has been involved in a number of Jewish organizations. He was active in Hillel and the Alpha Omega Fraternity where he served as president and regent, and was recognized by the fraternity with the Maimonides Award for his leadership. Over the years he has worked on behalf of the Combined Jewish Appeal, Israel Bonds, JNF and the Sharon Home, where he was the director for many years and then a governor of the board. Harold also was president of the Winnipeg North Rotary Club.

Harold has been involved in various athletic activities including speed skating, curling, golfing and fishing. His passion is playing his saxophones. He is a talented musician who began playing professionally at the early age of 13 with dance bands at Winnipeg Beach and the Auditorium. He continues to perform at various venues in Winnipeg.

Brownie and Harold have three daughters who are involved in their communities. Mira lives in Buffalo Grove, Illinois with her husband, Neil Zweiban and their three children, Zachary, Penina and Mollie. Ellen is a lawyer living in Winnipeg and Deborah also lives in Winnipeg with her husband Sidney Dashefsky and their son Alex.

By becoming signers to the Endowment Book of Life, Brownie and Harold are once again demonstrating their commitment to the Jewish community of Winnipeg and their optimism about its future.