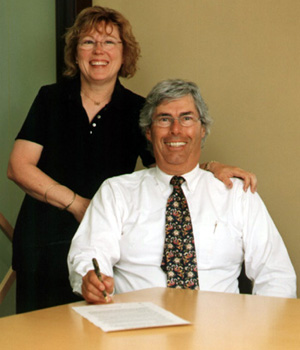 Brian's father, Leon Pauls, was born in Poland in 1906 and immigrated to Canada with his parents in 1925. The late Samuel Freedman took the then 19-year-old under his wing and tutored him in English. As a result, a year later Leon was able to pass his English equivalency test and enroll in medical school at the University of Manitoba. He graduated as a doctor in 1933. In 1938 Leon married Ruth Torgin. They had two children, Brian born in 1940 and Jacqueline born in 1944. Except for periods of study in the United States, Leon practiced in Winnipeg his whole life. He was one of the original doctors to volunteer at the Mount Carmel Clinic.

Brian grew up in Winnipeg and was an excellent student. He received the Isbister Scholarship when he was in grade eleven, and continued his studies at the University of Manitoba. There he earned degrees in commerce and law. Brian has always been an avid bridge player, earning his Grandmaster title when he was 23. That year he also began writing the bridge column in the Winnipeg Free Press, which he continues to do. In 1978 he represented Canada in the World Bridge Olympics. Brian has served on the Board of Glendale Country Club for several years, and as president of Shaarey Zedek Synagogue. He was also director of Legal Education with the Law Society of Manitoba. In 1970 he married Jeanne Bernacki.

Jeanne was born in Germany in 1944, arriving in Canada with her parents in 1950 and settling on a farm in Manitoba's Interlake. When she was 18 she moved to Winnipeg to attend Teacher's College, and met Brian four years later. Jeanne and Brian are very proud of their three children. David, who was born in 1971 is an actuary in Minneapolis. Rachel, who was born in 1973, is currently an ob-gyn resident and is married to Corey Pollock, son of Gordon and Toby Pollock. Debbie, who was born in 1975, is a university graduate planning a career in education.

Jeanne worked hard over the years raising the children and taking care of her ailing parents. She also had a busy career. In 1980 she returned to school and earned a Masters degree in Education Psychology. She then worked as a counsellor in the Winnipeg school system, retiring from there in 1999. She also worked in private practice, which she continues to do. Jeanne's work in the school system involved crisis planning, a very demanding and time-consuming responsibility that left her little time for community work. However, she did serve on the Board of Manitoba Theatre for Young People and on the Women's Endowment Fund grants committee.

After going to Russia in 1972, Jeanne became involved with the cause of Soviet Jews. She joined "The Group of 35", an international activist woman's group that worked to raise public awareness about the 2.5 million Jews of the Soviet Union who were not being allowed to leave Russia and emigrate to Israel. Her work with "The Group of 35" took the form of picketing, all-night vigils, demonstrations, and public speaking on radio and TV. When Nattan Scharansky came to Winnipeg to speak at the Shaarey Zedek, he met with "The Group of 35" and praised them, saying that it was because of their work around the world that he was allowed to leave and was now in Israel.

Jeanne and Brian are pleased to be part of such an accomplished and successful Jewish community. They feel, however, that the community continues to underestimate itself in spite of the amazing people it has produced. "We have fostered greatness in this community," they say, "and while it would be nice to keep people here, we should be proud that we are exporters of individuals who are intellectually brilliant, morally right, and productive contributors to society."