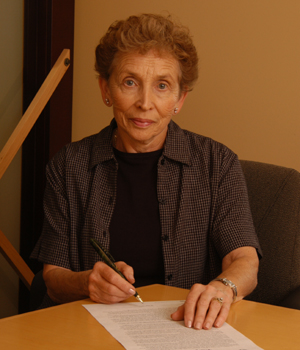 Marlene Goldberg signs her story for the Endowment Book of Life

"How do you tell the story of a man who shunned the limelight?" So began the conversation with Marlene Goldberg as she spoke about her late husband Bill. "He never wanted any special recognition and his initial thoughts about participation in the Endowment Book of Life would be to say - no way." However my late husband was a man of reason and consideration and he would agree that it is important to preserve one's heritage as a guidepost for the next generation — "How would you know where you are going to if you do not know where you have come from?"

The guidepost that Bill has left is his "drive" and the positive energizing force that he brought to all that he undertook. This story is Marlene's way of preserving Bill's memory and providing a glimpse into his character for future generations. Not unsurprisingly Bill's energies were focused on his career, his community and his family. What was surprising was that he was able to maintain this drive at a high level in all the competing areas.

It would be a disservice to Bill's story to not mention that he along with his partner took a Kentucky Fried Chicken franchise new to Manitoba and grew it into a thirty plus chain of restaurants. That would have been enough professionally, but not for Bill. In addition to specialty restaurants that he brought to Winnipeg, he threw his energies into his professional associations. First rising to the position of Manitoba President, Bill went to become the President of the Canadian Restaurant Association.

"If you want to get something done, ask a busy person" is a common refrain. Many community organizations saw Bill's energy, wanted to capitalize on it and were rarely refused or disappointed. Bill was passionate about his love for Israel and was a tireless worker for Israel through the Jewish National Fund. Countless trips to Israel strengthened that attachment. Israeli emissaries in Winnipeg became Goldberg family members. All this was reciprocated when Bill traveled to Israel as he was treated there like a visiting dignitary.

Closer to home Bill recognized the importance of Jewish community service and he was not afraid to speak out and canvass on behalf of community organizations. Not born a public speaker, Bill's passion and commitment allowed him to develop that skill. "He had overcome the fear of asking, others should overcome the fear of giving".

Bill was not born an observant Jew but as he evolved he became more comfortable with the time he spent in synagogue. Even though his friends who called him Willy always asked the question "what makes Willy run?," they knew that no matter where he ran, he did so with a yarmulke in his pocket so that he was always prepared to go to a synagogue. "I may be in a strange land but not with strangers if I am in a synagogue" was how Bill lived.

Tragedy struck while on a family vacation and Bill passed away before he had the opportunity to say what he felt to his family, the other great passion in his life. Marlene's independence as a wife and mother afforded Bill the opportunity to meld business, community and family. His daughters Carol and Susan, and later on his grandsons, were most important to him. Not one to give advice, if asked he would say "do the right thing and you can't go wrong". He would be proud of the choices that they are making today.

Bill would be comfortable with the "Promise" that accompanies his story in the Endowment Book of Life. In addition to the historical record being maintained he believed that fundraising for worthy causes was important and it was an individual's responsibility to encourage others to "do the right thing".