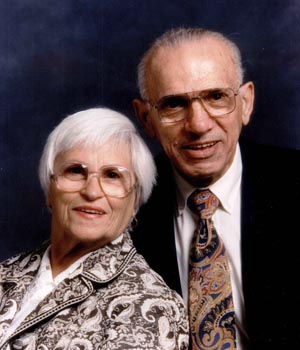 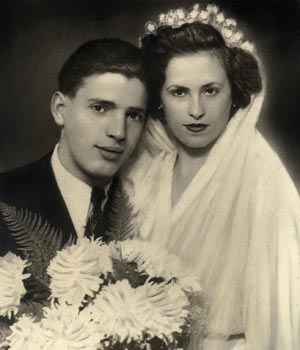 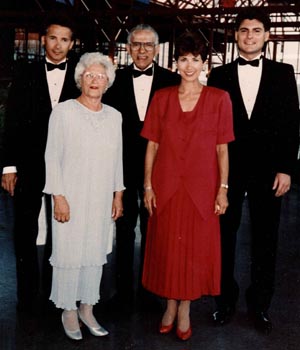 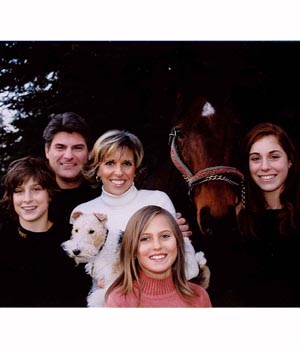 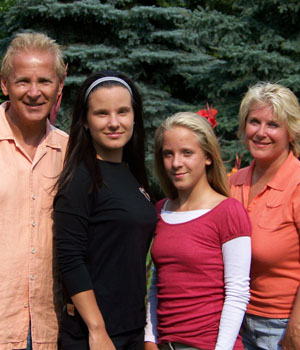 Louis Blanaru with wife Janice and their daughters Aubray and Asher

Bianca Ruth and Frank Blanaru are blessed to truly be partners in life. For over 60 years they have shared their lives ...as displaced people ...as new immigrants ...as entrepreneurs ...as co-workers ...as parents ...as fellow volunteers ...as friends. They have in common, among many other things, affection for animals, a love of laughter, and an undeniable zest for life. Just as Bianca Ruth's beautiful needlepoint pictures hang throughout their home, there is no doubt that they see beauty in the world around them.

Frank Blanaru was born in Bucharest, Romania on June 2, 1914. Bianca Ruth Blumenfeld was also born in Bucharest on May 4, 1921. They were married on November 5, 1944. At the end of World War II they applied to come to Winnipeg because Frank's mother had two sisters here and they knew it would mean a better life for their family, which now included Louis, born in 1945 in Bucharest, and Dina, born in 1948 in Germany. While they waited, they moved to Israel where Bianca Ruth had family. After 14 months, Frank's aunts had sponsored his mother, and now his mother was able to sponsor Bianca Ruth and Frank, and so on December 22, 1950 they arrived in Winnipeg. Their son Chuck was born in Winnipeg in 1959.

When they first arrived, Frank went to work for Mr. Kanee at Soo Line Mills and after a short time started work with the Canadian Pacific Railway. The Blanarus needed a car, so they opened "Frank's Eats", a small restaurant on Water Street close to the CPR station. Bianca Ruth would take the bus early in the morning and open the restaurant so that when Frank finished his night shift he and his fellow workers could come in for their morning coffee. Frank then helped her out at the restaurant. They operated this way for about a year — just long enough to buy a car!

The Blanarus first lived in an apartment on St. John's Avenue, then moved into a house on Cathedral and Parr. For a short time they rented on Polson Avenue, and then purchased their home at 445 St. Anthony Avenue, a house they lived in - and loved - for 45 years. They credit Sam and Bill Pitch with making this possible by co-signing for them.

They also give much credit to Dr. Henry Faintuch, director of the Sharon Home, and his wife Sonia. They gave the Blanarus the opportunity to manage the cafeteria at the Sharon Home, which they did from August 11, 1970 to February 14, 1977 (Bianca Ruth has an amazing memory for dates!). Frank, still working nights for CPR which he did until his retirement in 1979, would do the grocery shopping and serve as cashier, and Bianca Ruth would plan menus, cook and manage the kitchen. They have always worked together very well and thoroughly enjoyed this time. After they left the cafeteria job, Bianca Ruth continued to volunteer at the Sharon Home for the next 17 years.

Volunteerism and charitable work has been a big part of the Blanaru home. Bianca Ruth is a life member of Pioneer Women and remembers with fondness the various activities to raise money for Israel. Both Frank and Bianca Ruth have volunteered with every Shalom Square Pavilion for Folklorama since its inception at the Y on Hargrave Street. They are supporters of both the Chevra Mishnayes and the Etz Chayim synagogues and feel it is a privilege to give to various charitable organizations.

Above all, the Blanarus are proud of their family. All three children graduated from Garden City Collegiate and pursued professional careers. Louis is a pharmacist in Winnipeg. He has four children. Holly and Joshua, from his first marriage to wife Lee, live in California. Holly is married to Aaron and they have three children, Astrid, Garrett and Amelia. Louis is now married to Janice and they have two daughters, Aubray and Asher.

Dina became a teacher and, among other positions, taught at her alma mater, Garden City Collegiate. She moved to Toronto where, sadly, she became ill and passed away on July 14, 1998.

Chuck is a lawyer in Nanaimo, BC. He is married to Blair and they have three children, Elle, Beau and Liv.

Bianca Ruth and Frank are very grateful that their children were able to pursue higher education, sometimes with the assistance of a scholarship or bursary. Their commitment to the Endowment Book of Life will be solidified with the establishment of The Blanaru Families Trust Fund, designed to help other young people pursue an education. They are happy to give back to the community that welcomed them and they agree - as they do on many things - that, having come to Canada to seek a better life for their family, they have not been disappointed.