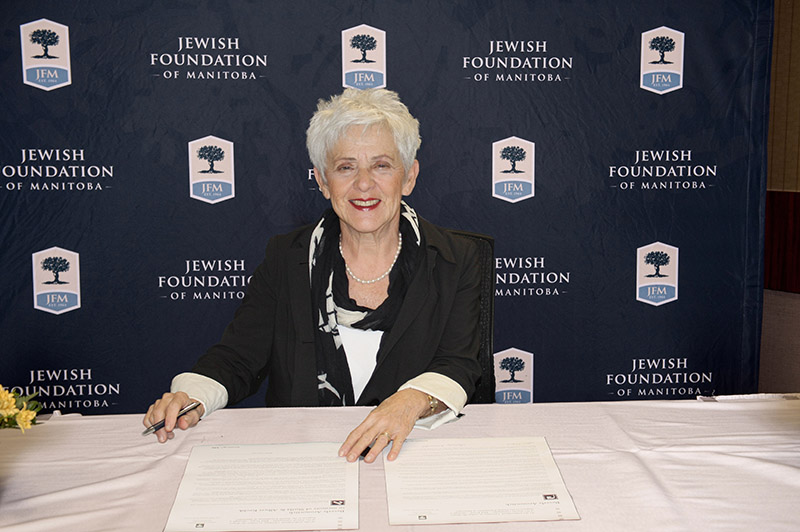 Beverly Aronovitch signs her story for the Endowment Book of Life

Following her lifelong passion for the arts, Bev has pursued a long and varied career as a musician, a music educator, a musical theatre director, a movement instructor, an arts consultant, an arts administrator, and most recently, a jazz producer. Always looking for a new challenge and a new learning opportunity, Bev has attended klezmer, folk and chamber music camps, eager to explore other genres and be energized by different musical experiences.

As a child growing up in Saskatoon, Bev loved animating people and creating artistic events with youth in the Saskatoon Jewish community. A Young Judea leader, Bev spent three summers at Camp Biluim, the organization's leadership training camp in Sudbury. She spent her final year on staff as an Israeli song and dance instructor.

Upon graduating from City Park Collegiate, Bev attended McGill University, majoring in English and psychology. While studying piano at the McGill Conservatory, Bev's teacher encouraged her to continue music education upon graduation. Taking his advice, Bev enrolled at Boston University where she completed a B.Mus. and an M.Mus.

Bev's teaching career began in the Wellesley, Massachusetts school system, where she taught for two years. She moved back to Canada to take a position as music consultant for the North York school board, responsible for assisting music teachers in 50 schools.

Although she never expected to move back to Western Canada, Bev moved to Winnipeg after a whirlwind romance with her husband Don, whom she met at a family wedding there.

Over the past 40 years in Winnipeg, Bev has enjoyed a long and fruitful career in the music and theatre worlds. She worked as an arts and curriculum consultant for the Department of Education for several years, as the music supervisor for the St Boniface School Division and as the executive director of Groundswell New Music.

Bev's happiest teaching memories are of her years at Joseph Wolinsky Collegiate where she taught musical performance, Jewish art and directed annual musicals. Her students were dynamic and talented and the rich experience led a couple of her prize students to pursue careers in theatre.

In mid-life, Bev was looking for a change. She tried her hand at musical directing and composing in the professional theatre world. She worked with the late Sheldon Oberman on the score for his play Dr. Quacker the Rainbow Maker.

Then came the most demanding undertaking in her life, the creation of the Winnipeg Jewish Theatre. Following the death of her father and seeking to make a contribution to the Jewish community, Bev, along with board president, David Cohen, and a team of dedicated volunteers, established WJT as a professional Jewish theatre. She spent five years as artistic director - a massive undertaking that required her complete devotion, time and energy. WJT just celebrated its 30th anniversary in 2018!

Since then, Bev has pursued her long-time interest in jazz, enrolling in the jazz program at Humber College in Toronto at the age of 60. After one challenging year, she moved back to Winnipeg and continued her jazz studies at the University of Manitoba School of Music.

After producing a few Winnipeg shows for Toronto jazz musician friends, Bev was approached by the Asper Foundation to assume the role of producer for the Izzy Asper Jazz Performances. She is now in her 15th year of happily bringing the best of the jazz world to Winnipeg.

In her retirement from full-time employment, Bev has discovered art as a new passion, taking classes in painting with acrylics and pastel in Winnipeg and in their winter home in Scottsdale.

Bev and Don have two children, Joshua and Judith. Joshua, a graduate of the Emily Carr School of Art in Vancouver, currently works in the social service industry. Judith, a graduate of Red River's culinary arts program, is now the mother of Bev and Don's first grandchild, Sloane Aronovitch-Pitt.