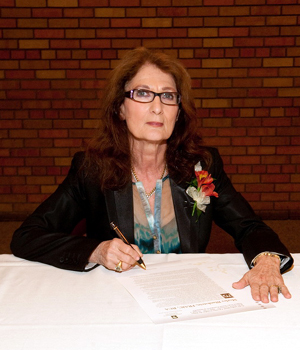 Beverley Gorenstein signs her story for the Endowment Book of Life

My father, Albert "Bert" Scharfstein, was born in Poland in 1907. With the exception of two brothers, his entire family died in the Holocaust. When he arrived in Canada, he worked at a variety of places until he was able to open his first small general store. This led to a series of general stores, the last one being Scharfstein's Department Store in Naicam, Saskatchewan.

In 1937, my father married Ethel Wiseman. She was born in Winnipeg in 1917 to Hymie and Molly (Hechter) Wiseman. Hymie was born in Russia and Molly in Romania. My mother worked alongside my father in his stores. They had four children: my older sister Annette (Albert), I was born second, my sister Debra (Avren) and my brother Brian Scharfstein.

We were raised in a home where we were taught an appreciation for people from all walks of life. Treating others with respect was a key value and any form of prejudice was not tolerated. My parents also modeled a love of community and were very active in a number of Jewish organizations.

In 1932, my father bought Patricks Ltd. which became Canadian Footwear Ltd. He operated the business first as a wholesaler, and then also as a retailer. They remained involved with the company until they passed in 1987, only seven days apart. Canadian Footwear is now owned by my brother Brian and his wife Pam.

Our family lived on Cathedral Avenue in Winnipeg's north end. I attended Peretz School, Champlain and Machray, and after we moved to River Heights, River Heights Jr. High, Kelvin and United College. In my teens, under the influence of my grandmother Molly, I began to pursue an interest in antiques. I often attended auction sales with her and gradually began collecting various pieces that I still treasure today. This appreciation and love for antiques ultimately led to a career as a collector and antique dealer.

In 1961 I married Sheldon Gorenstein and moved into his home on Manitoba Avenue with his father, Sam Gorenstein. Sheldon's mother, Rae (Dorfman), died of tuberculosis when he and his sister, Elaine (Yamron), were children. When we moved to Brock Street, Sam lived with us until his passing at the age of 57. He was a handsome, outgoing man who was exceedingly kind and generous of spirit and I learned much from him about giving openly of oneself.

Sheldon attended Machray and St. John's Tech. When we married, Sheldon was in his second year of dentistry at the University of Manitoba and I was working at the Hudson's Bay Company in the credit office. When he graduated, he worked for a short time in Selkirk, Manitoba, and then established his practice in Transcona where he enjoyed working with people from all walks of life. Sheldon enjoyed teaching dental hygiene and then endodontics at University of Manitoba Faculty of Dentistry.

Sheldon and I were actively involved in the community and in numerous activities. He was a runner, avid golfer, played tennis, squash and basketball, curled and bowled. He served as President of the YMHA and was the long-time chair of the Y Sportsmans Dinner. He was President of the Alpha-Omega Dental Fraternity, and served on committees for Hadassah and Pioneer Women. I was active with Hadassah for many years, and served as President of the "Becky Sokolov" chapter. I was also involved with numerous activities at the Y. With our children active in community sports, USY, B'nai Brith and the Jewish day schools where they attended, we became involved on parent committees and in fund-raising.

One of our biggest joys was when our home, or our cottage in Loni Beach, Gimli, was filled with people and laughter. We loved making a welcoming place for our friends, our children's friends, and strangers - from all walks of life - who became our friends! We enjoyed large gatherings at Jewish holidays and impromptu get-togethers of all kinds throughout the year.

In 1987 Sheldon and I travelled throughout Morocco. While in Marrakesh, I took advantage of an opportunity to take an early morning drive to visit a small factory where they were manufacturing clothes using beautiful fabrics. I was immediately gripped by the idea of bringing these fashions to Canada. I asked the factory owner how many pieces would be his minimum order, and he (spontaneously) said "600!" I went home, designed garments using those fabrics and went back to Morocco to have the samples sewn. I then went to Toronto and hit the streets with the plan of going from shop to shop. My very first order was for 600 pieces, and at my next appointment the owner said, "I'll take whatever she took!"

I returned to Morocco with my daughter Rachel, and it was there that our business, Moulé, which means "to shape or mold - the things that shape us", was born. Sheldon was encouraging and supportive. For many years I travelled back and forth with my children to Morocco and other countries designing, manufacturing and then retailing the garments. I was also a representative for numerous other designers. I travelled from Newfoundland to Victoria and met so many wonderful people, many of whom became friends.

I am proud and pleased that three of our children have joined me in the business. Its growth and success is due to their passion and vision. We have had countless adventures travelling to various parts of the world and meeting many enchanting people. 22 years later, we have one store in Winnipeg, two in Vancouver, and one in Portland, Oregon.

Sheldon and I had five children: Laurie (1965), Hartley (1966), Rachel (1968), Samuel (1970-1991) and Michael (1972). Laurie and Sharon (Steiman) live in Winnipeg and have two sons, Shea and Owen. Hartley and Marnie (Mason) live in Toronto and have two sons, Solomon and Zev. Rachel and Steve (Luker) have three children, Chelsea, Zachary, Connor, and two grandsons, Mason and Jackson. Michael and his partner Richard Johnson live in Vancouver. Laurie, Rachel and Michael are partners in the Moulé family business. Rachel is an independent fashion designer with the label "Rachel Mara" and Hartley works in the film industry as a producer. I am extremely proud of each one of them.

In addition to work and family, I have a variety of passions and interests that keep me busy. Antiques continue to inspire me and I have a special interest in collecting old cookbooks. I love people and spend time making and maintaining friendships.

I am very fortunate to have a loving bond with my children and my extended family. Samuel's death at 21 and Sheldon's death at 56 were heartbreaking experiences for myself and my children. Not a day goes by that we don't miss the extraordinary treasure that we had in Sheldon and Samuel, and we wish they could be here to enjoy this stage in our family's history and this time in our lives.

Keeping a close-knit relationship with my family and them with each other is what Sheldon and I treasured the most. I have been enriched by many friendships made by a daily goal of meeting someone new, learning something new, and taking the time to sincerely listen. This is the message that I would pass on to my children, grandchildren, their generation and those to come.