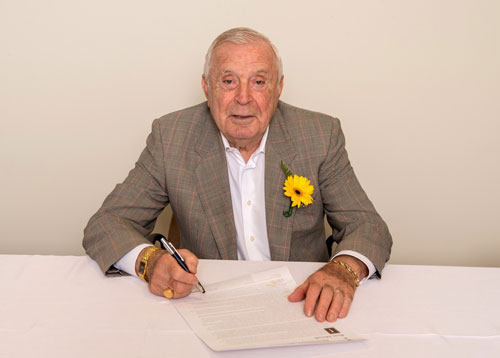 Bert Minuk signs his story for the Endowment Book of Life 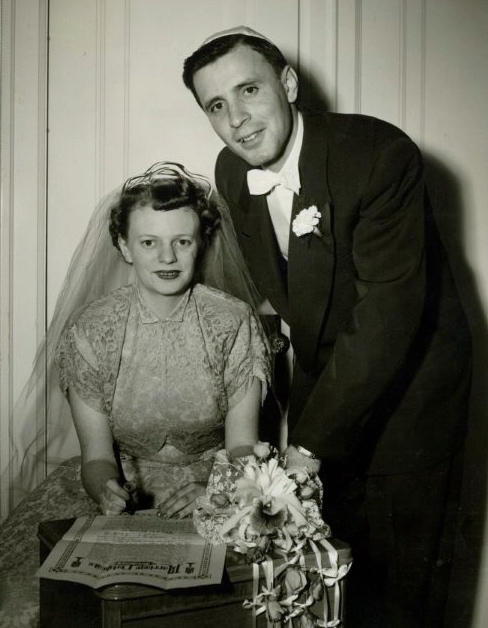 I was born in Winnipeg on February 3, 1928 into a large, close-knit Jewish family. My parents, Mandil and Lily Minuk immigrated to Canada in 1906 from Stariy Chartoriysk, a shtetl located in present day Ukraine. Devastating pogroms targeting Jewish shtetlach in the Pale prompted the Minuk family's decision to leave in search of a safer, better life for their children. I was the third youngest of nine children born to Lily and Mandil; the three eldest children (Sydney, George, and [unknown name]) died at young ages from childhood diseases. My brothers Bill (1924), Julius (1929), Sam (1931) and sister Ruthie (1923) have all passed in recent years. My only remaining sister, Doris Steiman (1921) lives at the Shaftesbury in Winnipeg.

I grew up in a modest, smaller home on Aberdeen Street in Winnipeg's famous "North End", leaving only when I married at the age of 25. I attended Machray School, followed by St. John's high school. I remember fondly the lunches my brothers and I would come home to that consisted of soup, meat and potatoes. My mother served and never sat while we ate our meals. My father ran "Minuk's Department Store" on Dufferin Avenue and although we were not a wealthy family, we were all well provided for. I attended Cheder after school until I was fourteen, and I remember my father paid three dollars per month to Rabbi Kahanovitch to give davening lessons to me and my brothers. My Bar Mitzvah was held at the House of Ashkenazie Synagogue on Burrows Avenue in February of 1941 followed by a reception luncheon in our home on Aberdeen. I remember as a child, that we put our spare change in the pischke to help the fledgling state of Israel, and that we were dancing in the streets in 1948 when Israel attained statehood.

After graduation from high school, I enrolled at the University of Manitoba in hopes of becoming a physician. I was the fortunate, first member of my family to attend university. Alas, finding I lacked the aptitude or stomach for medicine, I nevertheless graduated with my Bachelor's Degree. Initially I took an accountancy articling position with Sandell & Peltz, but left after a year feeling that it wasn't a good fit for my skill set. I worked briefly in sales, but then decided to start a real estate business with my older brother, Bill. We opened "Park Realty" and went forward to enjoy great success in our chosen field for many years.

For recreation during university and accountancy, my friends and I hung around Kelekis and the White House restaurants. We also enjoyed going to the College Theatre on main or Mickey's Pool Hall & Bowling Alley on Selkirk Avenue. As a member of the Jewish Fraternity, AEPi, I met Harry Garfinkel and Loren Pearlman who would be lifelong friends of mine.

I was introduced to Lola Fashler at Kelekis restaurant in 1949. We began to "date" although in those days, courtship consisted mostly of accompanying one's girlfriend home on a streetcar. During the summer, we would often take the train to Winnipeg Beach on weekends with friends to play Bingo, play games at the arcade or just relax on the sand. In June of 1953, Lola and I were married at her parents' home on Sherburn Street with Rabbi Schwartzman officiating. We enjoyed thirty years of marriage until Lola's untimely passing at the age of 52 from cancer.

We were blessed with three wonderful sons: Randy (1954), Earl (1956) and Harvey (1960). It was a happy, hectic home with my time divided between career and raising three busy sons. I remember fondly our Shabbat dinners at home, big family celebrations and summers spent at 60 Lake in Loni Beach.

My eldest son, Randy became a successful and respected criminal lawyer in Winnipeg. He married Linda Malko in 1989 and they had two daughters: Leigh (1990) and Lana (1993). Randy was taken from us far too soon in 2012 when he passed away from cancer. Earl trained as a physician and went on to specialize in Dermatology which he practices here in Winnipeg. He has four daughters: Laura (1989), Ainsley (1991), Erin (1994) and Melissa (1997). My youngest son Harvey earned an MBA from McGill and now makes his home in Toronto with Summer Nudel and step-daughter, Cleo.

After Lola's death, I eventually began to spend time with Marian Keith who had been a work colleague for many years. We married in 1986. Marian happily filled the role of "Baba" to my six granddaughters, often hosting large gatherings for Shabbat dinners or holiday meals. We traveled to Israel, spent several winters on Singer Island in Florida and enjoyed our summers in Gimli. After twenty-five years together, Marian passed away in 2011.

A hallmark of my life has been the wonderful relationships I have enjoyed with my siblings and their extended families. A grandson of my sister Doris used to describe fondly his vacations in Loni Beach as going "Minuk-ing". Although most of my siblings are gone, the extended Minuk family members, spread out over Canada and the US continue to celebrate life cycle events together and keep in close contact.

As a senior, I enjoy life to the fullest. I moved to the south end of the city a few years ago and I enjoy the close proximity to the Asper Campus. I work out, play Bridge and attend many of the cultural events the centre has to offer. I still attend services at the Congregation Etz Chayim every Shabbat and occasionally services at the Shaarey Zedek or Ashkenazie synagogues.

I value my community and its many agencies and organizations who serve to make life better for every Jew in Winnipeg. I make this commitment to my community in the hope that it will inspire others to embrace "tzedakeh" and offer their support as well. Despite hardships and personal losses, I feel I have been blessed and I remain optimistic about the future of our community.