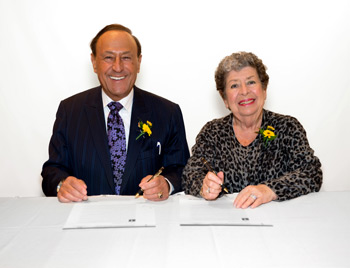 Bernie Lofchick signs his story for the Endowment Book of Life

They say that a hammer breaks glass, but it also forges steel. Influenced by my father, I have lived my life as a hammer. Sometimes a little brash, but always committed to standing up and trying to do the right thing — even if it got me in trouble.

I was born on a farm in Lotus, Ontario, in 1932. It was the Depression and my parents lost the farm when I was six weeks old. My father was Myer Lofchick from Rakev, Poland. My mother was Annie Zelikovich from Radom, Poland.

My father was the son of Leib Volf, a bootmaker and leather worker. I do not know the name of my father's mother. My father's arrival in North America is a story of prejudice and anti-Semitism, phenomena that shaped how he lived his life in Canada. He arrived in Brooklyn in 1895 to join his sister, only to be told that no more Jews were allowed off the boat. The ship carried on to Toronto. Same story. No more Jews were let off the boat. So off to Montreal my father went. Upon arrival, a French Canadian farmer hired my dad to work on his farm. On the boat, my father met a bagel maker who was allowed to disembark in Toronto. He was the only Jew that my father knew in Canada. After some months on the farm in Quebec, my father's host gave him a few dollars and sent him on his way. My father headed for Toronto, tracked down the bagel maker, and went to work for him for a short time until he got settled.

My father encountered anti-Semitism in Poland, upon arrival in North America, and often over the years. He was short, stocky, and strong, quick with his fists to defend himself and others against physical threats, verbal taunts, and discrimination. For defending himself, he spent time in jail on more than one occasion.

My parents married around 1918. My mother was the first member of her family to arrive from Europe, with others following as money allowed. Not all of them made it, with most perishing in the Holocaust. My mother was a spectacular cook and a very talented seamstress and clothing designer, a calming influence and a beautiful role model. She was the daughter of Mindel (a female judge in the old country).

Together, my parents launched the farm at Lotus. After they lost it, my father started to collect and sell scrap metal, saving enough money to buy the house they were renting. They were one of the first Jewish families to settle in Pontypool, Ontario, which was soon to become a popular summer resort area. Our family rented out rooms at what was dubbed "Lofchick's Strictly Kosher Summer Resort." Sometimes, people would drive out just for a delicious kosher meal! I worked at the resort with my two brothers and two sisters, schlepping luggage on a wagon from a mile away. There were originally nine Lofchick children; five survived.

Anti-Semitism was rampant in the area, despite the growing Jewish presence. One incident that still burns in my mind was the time I was beaten up by 11 boys from the same family. At my father's urging, I retaliated, one brother at a time, in the days that followed.

When I was about 12, we moved to Toronto for the winters only. My first day of school in Toronto was my last day of school ever. I was attacked as the new Jewish kid, and had to defend myself even before classes started. There was even an altercation with a teacher, and I was expelled.

I connected almost immediately with our next-door neighbour who was a drycleaner. I went to work for him, learned the business, and we later became partners. It was around then that I met Elaine Gobuty who was visiting from Winnipeg. I followed her to Winnipeg where we married in 1954 and built a beautiful life together. But even here, anti-Semitism reared its ugly head. At one drycleaner, I was hired on a Friday and fired on the Monday when the foreman found out I was Jewish. I moved on to Perth's, owned at the time by Isser Portnoy, but even there, I encountered threatening anti-Semitism and quit after a fight with one of the workers.

From there, I responded to an ad to become a door-to-door seller of pots and pans. I did very well and loved the work. After a while, I switched companies and ultimately had my own product lines for all of Canada.

It was under my daughter Myra's chuppa that I had a revelation. My work had kept me away from my family far too much. I cried through the entire wedding ceremony, and vowed to make a change as my younger children, Mindy and David, were still at home. Sometimes a hammer can even break down one lifestyle so another can emerge. I moved away from sales, and opened Midland Commercial Sales and Service and Midland Appliance. It gave me the balance I craved and I continue to enjoy success. In 2013, I had the honour of speaking to academics at a business conference in Cambridge, speaking on the life of the legendary sales motivator, the late Zig Ziglar, one of my very closest friends for 48 years.

I am a proud man who has worked hard. Self-made, as it were, and influenced by my parents; supported by my wife; and inspired by my children. I am fiercely proud of my Jewish identity and am honoured to support the community and invest in its future through the Endowment Book of Life.