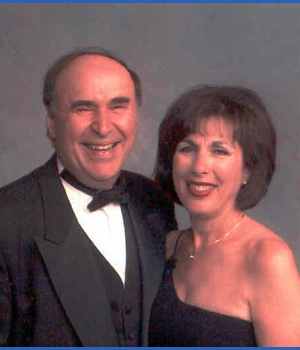 Bernie's parents, Lilly and Harry Rubenstein, were born in Russia and arrived in Canada in the 1920s. They lived in Hamilton and Kitchener and were in the produce business. Bernie grew up in Hamilton with his brother and three sisters. He attended public schools and then went on to McMaster University. When he was younger he was active in Tallis and Tefillin, B'nai B'rith, USY and AZA, serving as president of the latter two. He has fond memories of attending synagogue with his grandparents, and of all the sights, sounds and smells of living in a traditional Jewish home. He also enjoyed canvassing and raising money for Israel's Independence in 1948. His mother was president of Pioneer Women and hosted Golda Meir in their home.

Sheila, the daughter of Sadie and Max Levene, was born in Winnipeg and raised on Rupertsland Boulevard with her brother David and sister Ruth (Goldberg). She attended Seven Oaks, Edmund Partridge and Grant Park High schools, and then continued her studies at the University of Manitoba. She also attended night school at the Rosh Pina Hebrew school.

As a child and young adult Sheila was active in the YMHA, BBYO and USY, and later in National Council of Jewish Women and Hadassah. Her early life revolved around the Rosh Pina Synagogue, which her parents helped to found in the early 1950's. The family was active members, and she has fond memories of her Bat Mitzvah, of her involvement with Brownies and synagogue youth groups, and of attending Saturday morning services and her years as President of the Junior Congregation. This sense of community participation followed from Sheila's mother who had served as President of the Rosh Pina Sisterhood and of Hadassah.

Bernie and Sheila operate a successful retail business and both are active in many Jewish and secular organizations. Bernie was Men's Youth Aliyah Chair for two years and in that capacity participated in a Mission to Israel. He is currently ritual chair for the Rosh Pina Synagogue, and serves on the Sharon Home board and on the YMHA Sportsmen's Dinner Committee. He is also active with the Downtown Business Improvement Zone where he has been on the Advisory Board as well as the Board of Governors. Sheila has been active in the Breast Cancer Foundation, the Women's Endowment Fund and in National Council of Jewish Women. She has served as president of Hadassah and also co-chaired the Youth Aliyah campaign.

Bernie and Sheila were married in 1967 and they have three children, Steven, Jason and Jill, whom they have raised with a strong sense of traditional Jewish values. It is very important to them to maintain a traditional Jewish home and celebrate life cycle events and holidays as a family.

Both Bernie and Sheila enjoy working in the Jewish community and doing their part to help ensure that the community continues to thrive and remain a place where future generations will be able to benefit from good Jewish schools and strong synagogues. This commitment to our community extends to the general community as both Bernie and Sheila are strong supporters of the lifestyle that Winnipeg has to offer its residents.