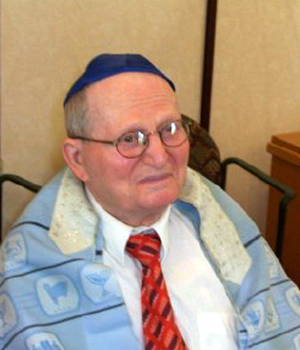 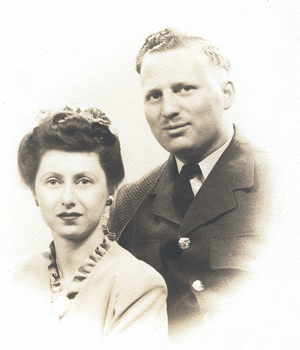 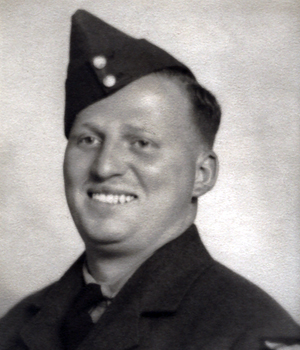 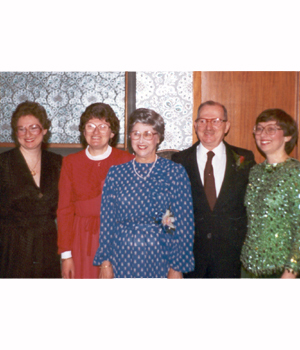 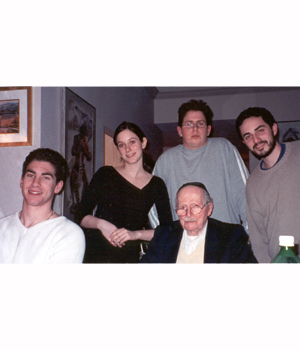 Early in the 20th century, a young lady named Ida Greenspan traveled first class from her home in Russia to New York. This was because she was to marry a man, via a matchmaker, in Odessa and refused. She lived and worked in the garment district of New York for two years before moving to Regina, Saskatchewan where she met her distant cousin and dairy farmer, Sam Pinsk, who became her husband. They soon began a family and had seven children: Goldie (Adelman), Dora (Sandell), Sadie (Raber, born August 18, 1921), Anne (Tucker), Beatrice (Bunny Gurvey), Zolman and Mona (Juravsky). When little Mona was just seven years old, her father passed away, leaving Ida to raise seven children. Ida later moved to Winnipeg and passed away there in 1972.

In early 1921, determined to leave their home in Poland to emigrate to Canada, Simcha and Leiba (Shpin) Raber left for Amsterdam with their three sons Wilfred, Michael and Ben (born June 17, 1920). Little Ben was just 6 months old but Leiba bravely went on to Canada with her sons when her husband was detained in Amsterdam because of problems with his eyes. He later followed them and the family made their home in Winnipeg. A daughter, Anne (Lewengood), was added to the family.

Ben grew up in Winnipeg's North End, had his Bar Mitzvah at the Talmud Torah, and graduated from St. John's High School. He then joined the Royal Canadian Air Force as an airplane mechanic, despite being known as an "un-handyman". During the war he was stationed in Mossbank, Saskatchewan with the ferry squadron and weekends saw Ben going into Regina "because there were Jewish girls there". Sure enough, he met Sadie Pinsk, a bookkeeper for a local drycleaner. She was a lovely girl, a terrific speed skater and avid baseball player. They married on March 5, 1944.

After the war, Ben attended the School of Design in New York while Sadie stayed in Regina. When he finished school they moved to Winnipeg where he worked for several clothing manufacturers including Jacob & Crawley and National Sportswear. Then in 1965, he established Raber Togs. Ben and Sadie ran the business together successfully until it was sold in 1985.

Ben and Sadie had three daughters: Sharon (Allentuck, born 1947), Marilyn (born 1948) and Elaine (Goldstine, born 1955). With three children to raise and a company to run, Sadie was the "original multi-tasker" — both home and business were run in an organized, no-nonsense manner. Family was always the first priority and despite a busy life, Sadie loved to cook and bake for family dinners — "if you have room in your heart, you have room in your home," she was known to say. Ben too was a family man - Sunday mornings were often spent visiting family members, and wherever he traveled in the world, he always sought out relatives. He came from a large extended family since his great- grandfather married seven times and had children with each wife except one — the last child when he was 80! Ben and Sadie had four grandchildren: Adam and Sarah Allentuck and Daniel and Jason Goldstine.

The Rabers' love for family was closely matched by a love for community. From an early age Ben took an interest in community affairs. Perhaps his strongest commitment has been to the Combined Jewish Appeal, where for almost his entire life he has served as a canvasser for the People's Division. He has served as President of Brandeis Lodge, General Monash Legion, and the Stay Young Club, and has served on the boards of the YMHA, Jewish Child and Family Service, and the Gwen Secter Creative Living Centre. He was a faithful Red Cross blood donor and served as canvasser for many community organizations. Sadie too loved to canvas for various causes, and was active with the National Council of Jewish Women, the Brandeis Ladies' Auxiliary, and Herzlia Sisterhood. The CJA was also dear to her heart, and she was proud to have served as Chair of Super Week.

Ben currently resides in the Sharon Home, Sadie passed away in 1985. After she died, Ben took lessons and learned to cook so that he could make Shabbas meals for his family. He also fulfilled a long-time dream which had been birthed when he and Sadie made their first trip to Israel in 1977. He began to visit Israel for several months each year, serving as a volunteer with the Jewish National Fund's Volunteer Work Program. He did this from 1986 to 1995. During the Gulf War he was issued a gas mask and at times took cover in a bomb shelter but refused to leave his beloved Israel.

The Rabers exemplify what has made Winnipeg's Jewish community thrive. They were hard-working, humble people with high principles and values who gave unselfishly to their community without the need for public recognition. Life for them, though busy, was simple: family, community, and Israel.