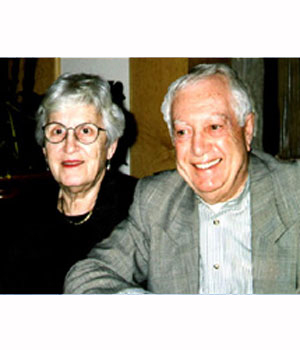 Oscar attended I.L. Peretz School and Isaac Newton High School. He served overseas with the Royal Canadian Air Force and attended the University of Manitoba to receive a degree as a Chartered Accountant several years later.

Bella's parents Rokhl and Dovid Roitman came to Winnipeg from Balilivka, Ukraine in 1926. They owned a grocery store and Dovid was a prominent Khazan in the city. Bella is the second of their four children.

Oscar was involved with the Jewish Community for many years. He was a Vice President of the General Monash Canadian Legion, Chairman of the Board of Education and then President of the I.L. Peretz School. He held office as Chairman of Community Relations and then as Chairman of the Western Division of Canadian Jewish Congress and a member of the National Executive of Congress. He was the last Chairman of the Western Division and was therefore party to the formation of the Jewish Community Council. He served on the Board and committees of the Jewish Community Council for many years. He is active in the Yiddish Committee of Congress and at present still serves as a National Chairman. He served on council of the Institute of Chartered Accountants of Manitoba and on it's National Research Committee. He was elected as an F.C.A. (Fellow of the Chartered Accountants) in 1972.

We believe that The Jewish Foundation of Manitoba is playing, and will continue to play, an important role in the financial future of the Winnipeg Jewish Community and in adding our signature in the Endowment Book of Life, we are joining the ranks of it's many supporters.