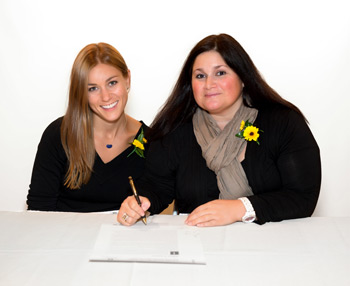 Becky, Samantha, and Adam (not present) Chisick sign their story for the Endowment Book of Life, in memory of their grandparents, Tamara & Max Chisick

Tamara and Max Chisick shared a wonderful marriage for 56 years. Theirs was a model partnership based on love, respect, friendship, laughter, and shared values. When Tamara passed away in 1998, Max missed her dearly and spoke of her frequently until his own demise in 2012.

Tamara was born in Winnipeg in 1922 to Sam and Sarah (née Markell) Gordon. Sam and Sarah both came from Russia, then met and married in Winnipeg. Sam came over practically as a child, without parents, and settled in the Birds Hill area where he farmed. He later worked for the CNR as the Baggage Master. Sarah had come over with her brothers who worked as cattle buyers. Sam and Sarah lived on Alfred Avenue in the North End. Tamara had one brother, Mark Gordon, who became exceptionally close with Max, Tamara's husband.

As a youth, Tamara was a talented speed skater and she used to tell stories of how her parents built pigeon lofts and welcomed in stray dogs and cats.

Sarah was rheumatic and Tamara took care of her, even after she and Max got married. She was a gentle and loving caregiver, driven by the love she had for her mother and by her deep feelings about the power of family. Family was always first and foremost.

As a wife, Tamara was a pillar and a partner. She endured Max's absence while he served overseas and spent time as a prisoner of war; stood by his side as he launched a business; and kept a beautiful home for Max and their three sons: Hart, Clifford, and Mark. Tamara was famous for her scrumptious dinners for Channuka, Pesach, Rosh Hashanah, and other occasions. When not taking care of the family, she volunteered at Rosh Pina Synagogue and for other organizations in the community.

In 1942, Tamara and Max were married. Max had a big personality, a big appetite, and a big heart. Like Tamara, he was passionate about family.

Max's story began with his birth in Winnipeg in 1921 to Abraham and Channah (née Kettner) Chisick, originally Chyzyk. Abraham was born somewhere in the Baltics; Channah in Ukraine. They met and married in Europe and moved to Winnipeg around 1920. At one point, Abraham was assumed to be dead — a victim of the flu epidemic. Mysteriously and shockingly, he was revived, demonstrating a sense of survival that Max would draw upon later as a POW.

Max was one of four children. His siblings were Celia, Charlie, and Joe. The family grew up on Jarvis Avenue in the heart of the North End melting pot. Max and his family communicated with neighbours in Hebrew, Yiddish, Russian, German, and Ukrainian. Max's father ran a scrap metal business out of the back yard, and a small shmata business across the street. When not sneaking out to watch Charlie box, Max helped out in the family businesses and developed a taste for the scrap metal business.

The scrap business would wait, though, as Max went off to university to study science (which he called "pre-medicine"), get married, and join the Royal Canadian Air Force as a navigator in Lancaster bombers. In one horrifying wartime episode, his plane was hit and caught fire. Max jumped from the burning plane, landed in Germany, and was captured as he tried to make his way to the Swiss border. The pilot, Edward Saslove, a Jewish man from Ottawa, crashed and was killed. Max and Tamara's oldest son, Hart, was given the middle name, Edward, in Saslove's honour.

Max was reported to be "missing in action" when actually serving as a POW for nine months at a camp outside of Munich, Germany — while Tamara waited nervously in Winnipeg. Max's Nazi captors did not know he was Jewish, which would have likely spelled a different end to the story. The fact that Max could speak so many North End Winnipeg languages might have saved his life.

Three days after the Nazis were defeated and the Russians took control of the camp, Max escaped before he could be formally released, stole a motorcycle, and made his way to the western front. It was years before he would speak of the details of his experience. Later in life, his eyes would well up at Remembrance Day services and he even accepted invitations to speak to schoolchildren about his wartime experiences. He took pride in the fact that he was able to share his story and teach a younger generation.

In 1945, Max came back to Canada on a ship full of former POWs. The men were all clutching on to their back pay that was earned while they were in captivity. Without much to do, the former soldiers played a lot of craps at sea. Long story short — when Max came home, he built a new home for him and Tamara on Rupertsland and paid for it in cash.

Upon his return, Max went back to work with his father, but in 1950, Max and his brother, Charlie, started their own scrap business called Chisick Metal. Max was a playful character who loved betting on horses and attending sporting events, but didn't care for the outdoors (a couple of failed fishing trips discouraged him even further).

Tamara and Max built a loving, Jewish home for Hart, Clifford, and Mark; they embraced their daughters-in-law, Betty, Maxa, and Haderra; and their world was brightened immensely by their grandchildren, Becky, Casey, Daniel, Joshua, Adam, and Samantha. Their grandchildren became their lives. They spoiled them, and they were present for every important moment. Max enjoyed a special relationship with Becky's daughter, Lily, who was five when Max passed away; and he had the privilege of knowing Adam's wife, Michelle, and Samantha's fiancé (now husband) Noah. He was proud to embrace them and welcome them to the family.

Beyond family, Tamara and Max believed in the importance of fostering a strong Jewish community. They were philanthropic and spiritual; they were connected and proud. They would be honoured to have their stories shared in the Endowment Book of Life.