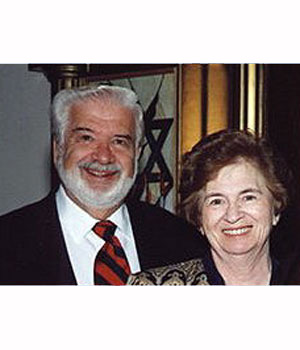 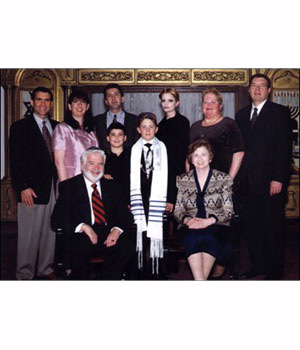 Laurie A. Mainster was born on September 18, 1925 in Winnipeg. His parents, Arthur and Fannie (nee Cohen), together with his mother's parents, Zodeck and Golda Cohen, and two of his three brothers , and one sister arrived in Canada in 1913. Arthur worked for the CNR and Zodeck made his living as a peddler.

Laurie attended I.L. Peretz School, Machray Junior High and St. John's High School. After serving in the Royal Canadian Air Force he married Bernice (Bayla) Claman, a medical technologist from Saskatoon, Saskatchewan on November 27, 1948. He has had a successful career in advertising, marketing and public relations. Their children are Cheryl, married to Viktor Lewin and grandchildren Brianne and Eli, Gail, married to Harold Gutovich and grandson Jay, and one son, Sam.

Bayla's parents, Sam and Katie Claman emigrated to Winnipeg from Krasnatov, Ukraine and Mogylov, Russia respectively in 1917. Katie worked in the needle trade and then owned a small grocery, Sam was a blacksmith and operated a junk business when they moved to Saskatoon. Bayla is the seventh of their six daughters and two sons.

Laurie received the Advertising Association of Winnipeg 1993 Director's Award, the Winnipeg Jewish Community Council Shem Tov Award in 1997 for his role as marketing/public relations Chair for the Asper Jewish Community Campus and in 1998, was selected for a special community award by the State of Israel Bonds in celebration of Israel's 50th Anniversary.

"As the Asper Jewish Community Campus has instilled a new vibrancy and has revitalized our Jewish community and its identity in the City of Winnipeg, so do we believe that The Jewish Foundation of Manitoba will secure the financial future of the Jewish community of Winnipeg. We are anxious to ensure that the community survives and in signing the Endowment Book of Life, our endowment will leave a contribution in perpetuity to help its financial support."

On May 24, 1997 the Mainster mishpocha gathered to celebrate grandson Eli Lewin's Bar Mitzvah.