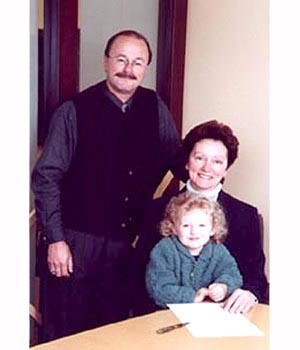 I was born in Winnipeg and grew up on Aberdeen East. I attended Peretz School on Aberdeen and later on Aikens. My mother Toby (Mernick) came to Canada alone from Kiev, Russia to live with her sister and brother-in-law Nancy and Morris Kligman. My father Itzhak came to Winnipeg after serving in the Polish army and joined his brother David Lank.

My mother worked in a sewing factory and my father worked as a clothing designer. My brother Marshall and I grew up in a Jewish house filled with the traditions of Jewish culture. I remember large family gatherings for Passover and other holidays. Unfortunately I never knew either of my grandparents, as they never emigrated from Europe.

My father taught me what it meant to be Jewish and made going to synagogue a Saturday morning tradition. When we later moved to Enniskillen I attended services on a regular basis at the B'nai Abraham Synagogue. My father died when I was 15 years old but his wish for us to follow our Jewish roots continues to be fulfilled to this day. My father's wish for me to educate myself led me to return to school and obtain degrees from the University of Winnipeg, the University of Manitoba and the London School of Film in the U.K. My profession of film producer has allowed me to work on many projects within the Jewish community. I am particularly proud of the work my wife Luanne and I did on the Steven Spielberg project "Survivors of the Shoah" in which we documented the stories of Winnipeg's Holocaust survivors.

Luanne and I are partners in marriage as well as in business but our greatest production is our beautiful daughter Hannah "gift from God" which she truly is. We will teach our daughter what I learned from my parents, that being Jewish and being part of the community is what really counts. Priorities are family, friends and community. I hope that someday when she reads this she will already know what we mean as will the children and grandchildren that follow.

My hope is that future generations continue the work begun by this and previous generations.