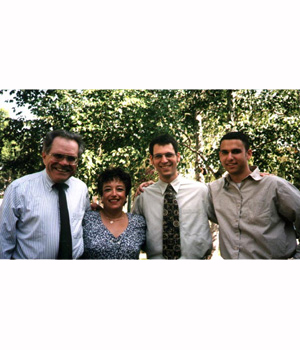 Barbara Hirt and her family

When people hear my name, I hope they smile and say...

"Oh, you're Rae and Phil Hirt's daughter. How lucky you were to have had such caring parents. I remember how much they loved one another, how they worked side by side, day in and day out, in the Jefferson Groceteria at Jefferson and Salter.

I remember your mother's gefilte fish, chicken soup, apple strudel, and potato knishes. I think about the courage that your dad and mom had when they left Poland in 1929 in order to find peace and prosperity in a strange, new country. Phil's family settled in Hirsch, Saskatchewan and Rae's family in Winnipeg.

I saw their determination to be self-supporting even though they didn't have two nickels to rub together. I admired their strength in encouraging and providing for the education of their two children. They taught their children the meaning of Yiddishkeit and that when it comes to charity, you give until it hurts

Rae always said 'Do what's best for you.' That's how she and Phil lived their lives, teaching their children by example to do the right thing, not necessarily what everyone else was doing. With a tear in his eye, Phil often repeated how his wife had made a mentsch out of him.

....Out of this marriage I was born on August 7, 1947. My brother Mel and I grew up in West Kildonan where I attended Sholom Aleichem shul for kindergarten, public school for one year and then I.L. Peretz Folk School for the remainder of my elementary school education. I went on to Edmund Partridge Junior High, West Kildonan Collegiate, and the University of Manitoba.

My parents and my Baba spoke only Yiddish in the home, and I have fond childhood memories of lively family seders — how I enjoyed my mother's cooking! Rae died in 1992 and Phil is still alive and well, walking four miles a day. They were model parents.

I remember Rosh Hashana at the Manitoba Avenue shul, my Peretz School classes, the "Ingenues" group at the Y, and my involvement with BBYO, especially my term as president of the BBG Rachels chapter. More recently I served as president of the Tikvah chapter of ORT and became a life member of the organization. I have also volunteered at Winnipeg Harvest — there really are many people who don't have enough money for food.

In 1997 I married the love of my life, David Petrie. I have two children from a previous marriage: 26-year-old Jason Brackman who lives with his wife Ali Zentner in Calgary, and 24-year-old David Brackman who married Anna Baranowski in the summer of 2000. They live in San Diego.

I have spent my working life as a guidance counsellor, but what I really wanted was to be one of the Supremes..."Stop! In the name of love..."