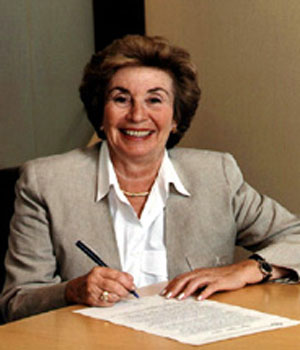 In 1903, my father, Maurice Bernstein, came to Winnipeg from Poland, travelling through Austria and England. My mother, Sara Churchill, emigrated in 1913 from the town of Elizavetgrad, in Russia. They met in Winnipeg and married on December 5, 1923. My father found work as a salesman while my mother stayed at home raising my brother, Mark, and me. Both of them were passionate volunteers in the Zionist cause and worked tirelessly for the establishment of the State of Israel.

I attended I.L. Peretz Folk Shul for kindergarten and Grosvenor School for Grades 1 to 6. My junior high years were spent at Robert H. Smith, and my high school years at Kelvin. I graduated with a Bachelor of Arts from the University of Manitoba in 1954.

As a young person, I was involved in Young Judea and the YMHA, where I particularly enjoyed the "Chickletts" club. I also have fond memories of the old Shaarey Zedek Synagogue on Dagmar Street, and Rabbi Frank's influence. At University, I belonged to Hillel, and as an adult I been active with Canadian Friends of Hebrew University and have served on the Boards of the Winnipeg Jewish Community Council and Winnipeg Jewish Theatre.

I met Israel Asper while we were both at Robert H. Smith School, and we married on May 27, 1956 in Winnipeg. We have three children, David, Gail and Leonard and their spouses Ruth, Michael and Susan. We also have seven remarkable grandchildren!

My wishes for the future of my family, and my hopes for the Jewish community, are my motivation for signing the Endowment Book of Life. Through our endowments, my husband and I hope to help our community to thrive and enable it to provide the same quality of Jewish life for generations to come, that we were privileged to enjoy in our youth.