Audrey Agasi - in memory of Esther and Oscar Weinstein 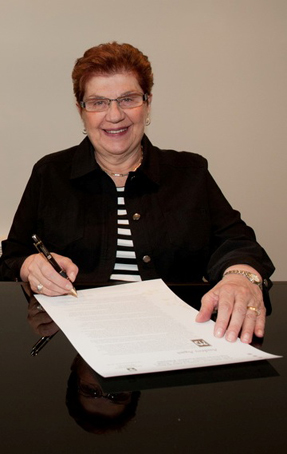 Audrey Agasi signs her story for the Endowment Book of Life, in memory of Esther and Oscar Weinstein 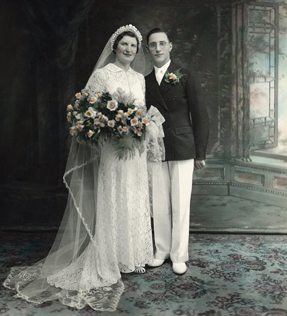 Esther and Oscar Weinstein on their wedding day 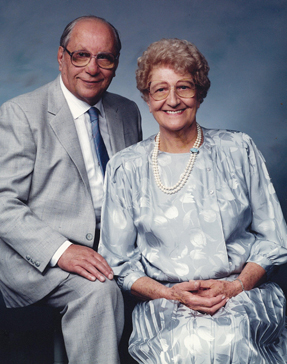 Esther and Oscar Weinstein on their 50th Wedding Anniversary

Hard work, Jewish living, and exceptional generosity characterized the lives of Esther and Oscar Weinstein. Oscar passed away in 1992; Esther in 2005. This story is a tribute to their contribution to life in our community.

Esther Gelfond was born in 1912 in Rumsey, Alberta, where her parents settled after leaving Russia to escape anti-Semitism. It was a simple, frugal childhood of which Esther spoke little in her adulthood. Her parents eked out a living by farming the rocky fields, and she lived with her parents and three brothers in a tent. They rode horses to get to school. Her father, known as "Big John," was a respected leader who established a small shul for the Jewish farmers to attend. Very little is known about Esther's mother, other than the fact her maiden name was Gurevich.

Esther eventually moved to Calgary to work as a secretary and then on to Winnipeg where she met and married Oscar Weinstein.

Oscar was born in 1910 in Melnitzer, Poland, to Sarah and Velvel Weinstein, and was the first of the family to move to Canada after Velvel died at a young age. He came to Winnipeg because there was a cousin here. He started to work in the egg candling business—usually 18 hours a day—and ultimately saved enough money to bring over his mother and two brothers.

Oscar's brothers settled in Melville, Saskatchewan, to work at Western Produce, the family's cold storage and egg candling business. They worked out of Humboldt, Saskatchewan. They also opened hotels in Swift Current and Moose Jaw. Oscar chose to live in Winnipeg and commuted to run the business, sometimes for weeks at a time.

Oscar and Esther had two children, Fred (Weinstein) and Audrey (Agasi). Esther was a tireless homemaker whose Pesach seders and Rosh Hashanah kiddush lunches were legendary, sometimes attracting up to 100 relatives and friends.

Beyond Western Produce and the hotel business in Saskatchewan, Oscar was a successful real estate investor and served as the president of the syndicates that owned the Paris and Avenue buildings. He owned the Garry Theatre, which he converted to Garry Lanes, a popular bowling alley that his son-in-law Israel Agasi ultimately ran for 42 years.

Esther and Oscar were admired for their philanthropy and community involvements. Esther was a member of Hadassah and Eastern Star; Oscar was a Mason and one of the original founders of Rosh Pina Synagogue. Oscar used to say that every good organization was like a "good stock" worthy of investment. He was particularly supportive of the Jewish National Fund, the Jewish Foundation of Manitoba, and causes that helped orphans who came to Canada after World War II.

Oscar was also seen a wise man and people would often seek his opinion and advice. Having had very little formal training or education, Oscar was still able to influence his grandchildren in sports, math, and life in general. He wrote wonderful letters, delivered memorable quotes, and could persuade people with his common sense. A favourite story was how he once convinced Revenue Canada to allow him to pay his wife Esther a salary to write letters for him. We pay fire fighters a salary; we don't pay them by the fire, he said. Similarly, he had no interest in paying Esther by the letter.

In 1953, Oscar was invited to a meeting with Levi Eshkol, who later became the Prime Minister of Israel. Eshkol was trying to convince Oscar to set up a business in Israel. An ardent Zionist, Oscar decided instead to donate a good deal of money to the country over the years.

Esther and Oscar were proud parents and grandparents, and proud to support the community the way they did. Their philanthropy was typically anonymous, but they would have appreciated the inclusion of their story in the Jewish Foundation of Manitoba's Endowment Book of Life if it inspired generosity in others.