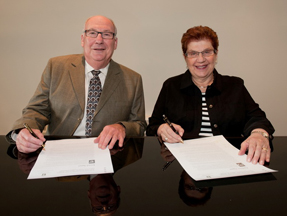 Audrey Agasi signs her story for the Endowment Book of Life 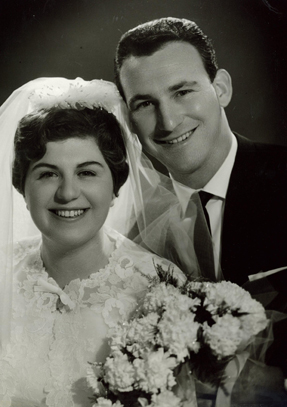 Audrey and Israel on their wedding day 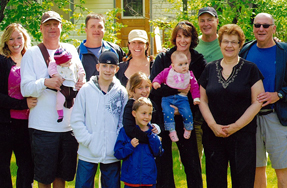 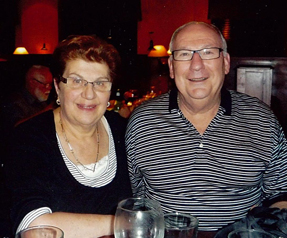 My participation in the Jewish Foundation of Manitoba's Endowment Book of Life program is inspired, in part, by the legacy of my parents, Esther and Oscar Weinstein. They were deeply committed to growing the community and helping people who needed help. I hope that my commitment to the Foundation has a similar impact.

My mother, Esther Gelfond, was born in 1912 in Rumsey, Alberta. Her parents had come over from Russia to escape anti-Semitism. They lived in tents as they tried to make a living by farming the rocky, awful land. It was a very simple, frugal existence. Interestingly, my grandfather, known as "Big John," started a synagogue while in Rumsey. I like to refer to it as "the little shul on the prairie."

My father, Oscar, was born in Melnitzer, Poland, in 1912 to Sarah and Velvel Weinstein. He came to Canada in the 1920s because he had a cousin here. He started his career in the egg candling business and saved enough money to bring his mother and brothers over. His father passed away as a young man in Poland.

My parents got married in 1938. My mom was a dedicated, loving homemaker; my dad was a respected, successful businessman. They created a happy, traditional home life for my brother Fred and me as we grew up on College Avenue and Seven Oaks Avenue. Jewish holidays and Jewish living were very important in my home. Sometimes, there would be up to 100 people in our home for Kiddush after Rosh Hashanah services. We grew up learning the importance of giving to the community. My parents were philanthropic and active in the Jewish community. My dad was one of the founders of Rosh Pina Synagogue and my mom was active in Hadassah.

I went to Peretz School, Machray, Balmoral Hall, West Kildonan, and United College. I was active at the YMHA and in BBYO and figure skating was one of my favourite pastimes.

A real turning point in my life was a family trip to Israel when I was 18. Shortly after arriving, I turned to my parents and told them that I wasn't coming home. They were shocked, but supportive. I fell in love with this young, primitive country almost immediately. There was a raw, exciting energy in the air as people from all ages and backgrounds were building a country. I felt like I belonged.

My intention was to stay. With the help of an ulpan in Netanya, my Yiddish turned into Hebrew and I found work with a travel agency affiliated with the Histadrut where I met a young Israeli named Israel Agasi. We dated for several months and were married within the year.

We married on Diezengoff Street in Tel Aviv in 1965. More than 300 guests danced and celebrated with us.

We came to Winnipeg a few months later for a celebration with my family and friends. I decided to stay in Winnipeg while Israel returned to Israel to try to get established in a job with the Egged bus company. The Israeli economy was in severe recession, so we decided that he would return to Winnipeg and we would start our family here. We ultimately built our lives here and our children, David, Tamara, and Elana were all born in Winnipeg.

I was very involved with the kids as they were growing up and were involved in hockey, piano, and gymnastics. I worked part time for the Canadian Friends of the Hebrew University and, in my spare time, I took some psychology courses at the university. While I never practised as a psychologist, I like to joke that I used my skills on my children.

My father passed away in 1992; my mother in 2005. I was very involved with my mother's care in her later years.

Now that Israel is retired, we spend lots of time together attending cultural and community events, and catching up on our social lives. We travel often to visit the kids and their families (David in Phoenix; Tamara and Elana in Calgary), and to Israel.

We're excited to participate in the Endowment Book of Life program. It's a way to give back to a community that has been so good to us, and it's a way to demonstrate our optimism for the future.