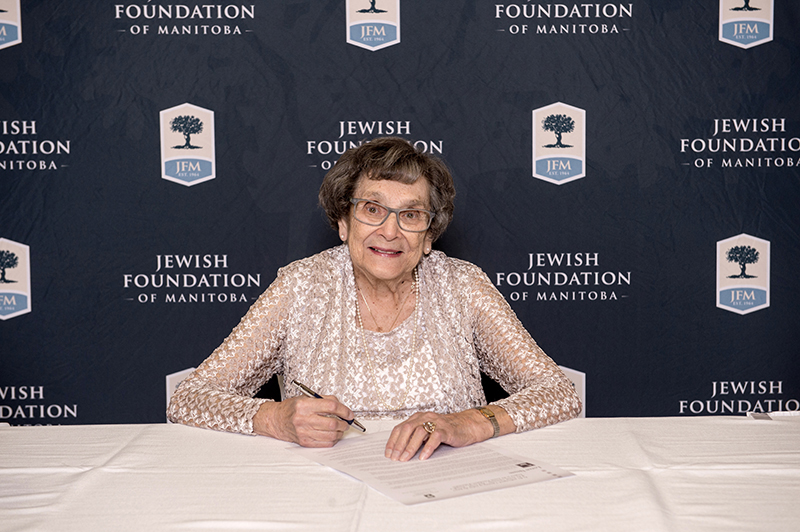 Arnice Pollock signs her story for the Endowment Book of Life 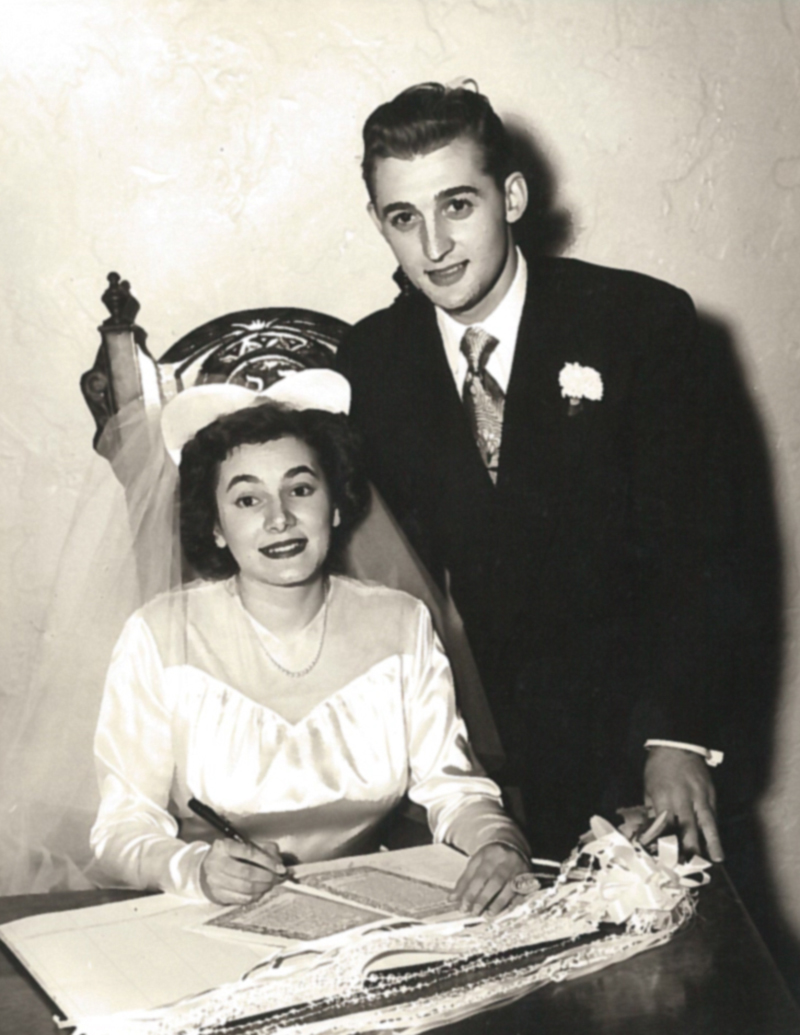 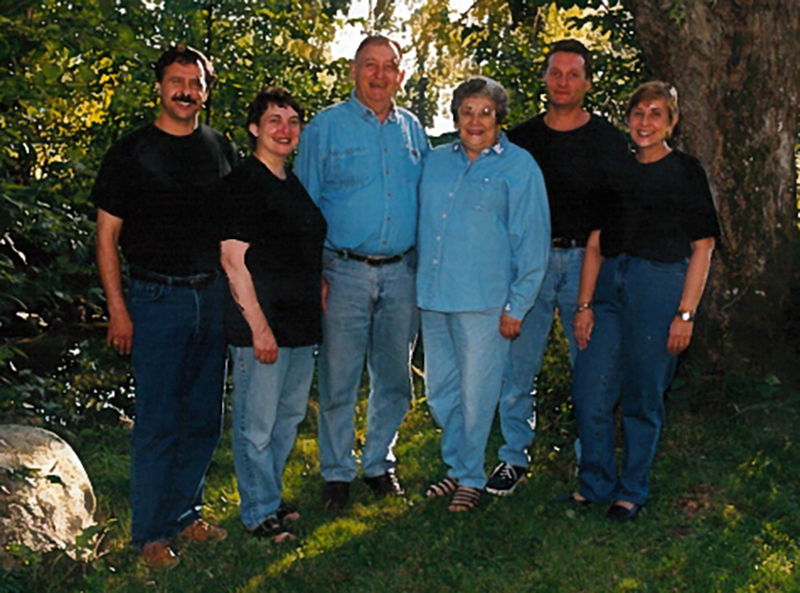 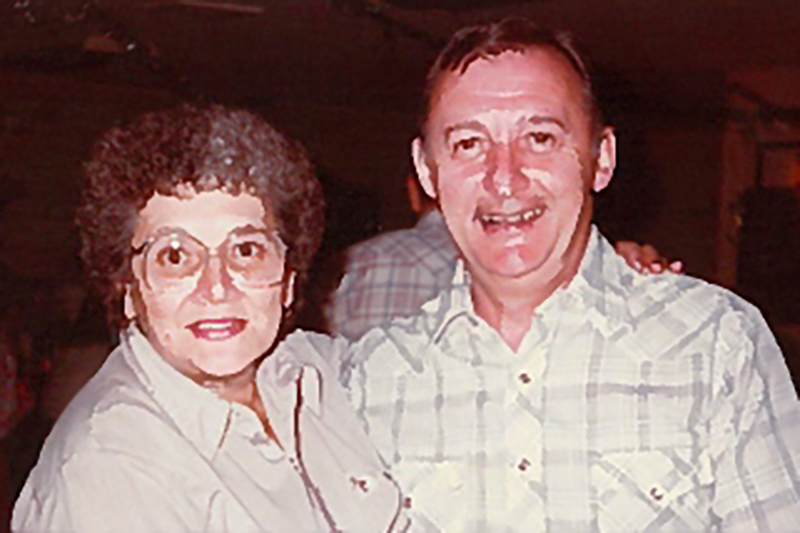 I was born in Winnipeg December 12, 1928, to William (Velvl) and Ethel Kozack (nee Brovender). I have lived here all my life and consider myself very fortunate for that.

My parents were immigrants. My mother's father Chaim Brovender left Koloshi, Ukraine, before WWI to join his brother here in Winnipeg. My Baba Henya survived the war and the Russian Revolution with five young children and came to Winnipeg in July 1920. Unfortunately Chaim died on Yom Kippur that year and the family had to cope without him. My mother was 16 and went to work in a garment factory, as did her older sister and brother. Two younger sisters were able to go to school for a few years. My mother told the story of how Mr. Sisler, the Principal of Strathcona School, would drive around the neighbourhood in the evening, picking up kids and encouraging them to come to school to learn English.

My dad was born in Bar, Ukraine, in 1901. He got to Antwerp, Belgium with his sister Pearl, her husband Sam Shatz, and their son Jack. There was not enough money for tickets for all of them to come to Canada, so he stayed behind for a year until they could save enough money to send for him. He found some work but said he survived in Antwerp mainly by eating sardines and black bread. He said he never ate sardines again. He arrived in Winnipeg in March 1921 and spent the next seven months working on a farm in Saskatchewan before returning to Winnipeg. His parents, Abraham and Bessie, and two younger sisters, Anne and Leah, were welcomed here in 1926.

My parents were members of the Kiever Society, which played a large role in their lives. It was "family" to many immigrants who had no relatives here. My dad was on the executive and was the Sick Visiting Chairman for many years. It was a position he took very seriously, making sure that anybody who didn't turn up at meetings was well and did not need any help.

My mother was also active on the Ladies' Executive and was the central reader for the women in their "Lein Kreiz" (reading circle). She was also an active member in the Peretz School "Muter Farein" (mothers' association) and the Jewish Orphanage. My parents' example of being involved in the Jewish community has always stayed with me. Sadly, my mother died of a brain tumour at 48 years. My father lived to the ripe age of 97.

I have one sister, Surella, who lives just outside Chicago.

I went to the Peretz School day school from kindergarten to Grade 6, and the night school from Grade 7 through Grade12. It was there that I learned to be interested in Jewish history, literature, and life. It was not an orthodox approach, but it instilled within me a love of Jewish culture and continuity.

During WWII there was a shortage of teachers for the Yiddish program at the school so a few of my fellow students and I were approached to teach in the night school. I became a teacher of Grade 1 students while I was in Grade 11 myself and it set me on a path I really loved. I taught from 5:00 to 6:30 then went to my own class from 6:30 to 8:00. I taught that class throughout my years at the University of Manitoba. After leaving Peretz School at the end of Grade 6, I went to Machray School for junior high and St. John's Tech for high school. In Grade 12 I won a scholarship that paid for two years of my U of M education. I was the first member of my family (maternal and paternal) to attend university and I feel it made it easier for my younger cousins to get this opportunity.

All my life, I had been called "Chanah" by family and friends, but while at university, a friend introduced me to Harold Pollock using my English name "Arnice" and "Chanah" disappeared. Harold and I hit it off right away and after I graduated in 1949 we were married December 25th of that year. I taught Grade 1 at the Peretz School day school while Harold continued his education until 1951, when he graduated and got a position in Winnipeg School Division No. 1.

We have a family of four children: Carol, a PhD in biology, who taught at UBC, Ellen, a lawyer here in Winnipeg, married to Stewart Leibl, Norman z'l, a lawyer in Edmonton, married to Janet Lerner, and Ken, a business analyst in Phoenix, Arizona, married to Lori Leinburd. We have nine grandchildren — Alana, AJ, and Ian McKenzie of Richmond, B.C., Matthew and Leah Leibl of Winnipeg, Shawn and David Pollock of Edmonton, Kevin Pollock of Tel Aviv, and Taryn Pollock of Phoenix, and two great-grandchildren, Cecily and Oscar McKenzie. One of my favourite memories was preparing Shabbat dinner every Friday night as well as Yontif meals for my family, a tradition I'm proud to say I've continued for my Winnipeg family to this day. We lost Norman in 2012 to ALS; Harold died in 2008. We miss them both very much.

When Ken was settled in school, I returned to the U of M in 1966-67 to get my certification as a teacher in the public school system, and in 1967 became the Grade 7 general studies teacher at the Peretz School. I enjoyed every minute I spent there and I hope I helped my students as well.

I have always appreciated the fact that I had a husband who encouraged me and supported me in my effort to be a good teacher. I was able to continue taking courses and received my Bachelor of Education degree in 1978. When Harold retired in 1984 I followed him. We wintered in Palm Springs, California, and we travelled. During these years I was a member of the Peretz School Parents Association, the Rosh Pina Sisterhood, Pioneer Women, ORT, National Council of Jewish Women, and the Yiddish Reading Circle at the Gwen Secter Creative Living Centre. I have been part of the group of women in the reading circle who have translated Yiddish authors into English so that they could be published.

The last few years I have volunteered at programs teaching English to immigrants and helping out with Grades 1 and 2 at Montrose School. I have also belonged to a bridge group for over 60 years. These are friends who are very dear to me. I am also a Bronze Life Master at the American Contract Bridge League and enjoy playing duplicate bridge.

I feel I have been fortunate in my life. There have been struggles and tragedies, but who hasn't had them? I look forward to continuing to be part of my community and enjoying my family.