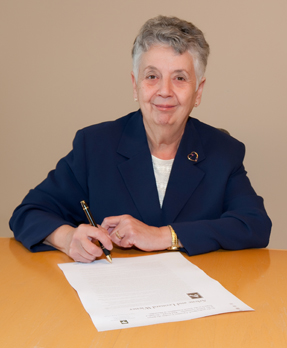 Arlene Wiener signs her story for the Endowment Book of Life 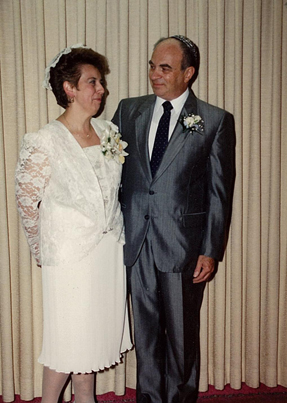 I was born in Winnipeg, Manitoba on July 31, 1939, the daughter of Ben and Pearl Rosenhek. I have two brothers, Eric and Sid Rosenhek and one sister, Anita Eccles. Growing up at 268 Pritchard Avenue in Winnipeg's north end; I attended David Livingston, William Whyte and Aberdeen elementary schools and St. John's Tech High School. When I was younger, I enjoyed knitting, reading and spending time with my friends at Habonim and the YMHA. My siblings and I were raised in a traditional Jewish home with strong Jewish values, where we kept kosher and observed our time-honoured traditions. I was very close with my brothers and sister - we always did everything together. Some of my fondest childhood memories are from that time. Since I was first to attend school, I remember rushing home after classes and teaching my siblings everything that I had learned during the day.

My father (Ben) and mother (Pearl) were both born in Winnipeg, Manitoba in 1914. My father worked as a carpenter, union organizer, accountant and income tax preparer. I will always remember him as a very well spoken gentleman and hard worker who was devoted to his family. My mother was a caring and hard-working stay-at-home mom, who raised four children and had a flair for making everyone feel welcome in her home.

My paternal grandfather, Arthur Louis Rosenhek, was born in Sambor, Austria and immigrated to Canada in the early 1900's in reaction to the looming war that was threatening Europe. He settled as a farmer in the Hirsch Colony in Hirsch, Saskatchewan and also became the Cantor of its Shul. My grandfather met and married my grandmother, Mindel (Minnie), in Canada and I will always remember her as the kind-hearted matriarch of the family. I didn't have the opportunity to meet my paternal grandfather, as he passed away before I was born - thus I was named after him.

My maternal grandparents, Zalman and Chia Nimchonok, were born in Russia and came to Canada in the early 1900's because of the impending war and the subsequent rise in anti-Semitism. My maternal grandfather, whom I called "Papa", was a kind and soft-spoken man who worked as a blacksmith. My "Baba" was a home-maker, who managed to raise four children despite suffering from chronic asthma. She rarely stepped out of the house and therefore only spoke to us in Yiddish — that is how I learned the language.

I met the love of my life, Leonard Wiener, in 1986 at a singles group, and we got married on June 28, 1989 at the B'nai Abraham Synagogue. Leonard and I enjoyed our life together. We loved going on trips to Israel, cruises, summers at Winnipeg Beach and spending our winter in Florida. Leonard was born in Winnipeg, Manitoba on March 26, 1936. Growing up in the north end on Flora, Mountain and Perth Avenue, he attended Victory and Aberdeen elementary schools, St. John's Tech and West Kildonan Collegiate for high school and Success Business College for post-secondary studies. Leonard enjoyed going to the YMHA and participating in extra-curricular activities and had a passion for hypnotism and taking care of animals and reptiles. Leonard confided in me that he had a lonely childhood, being an only child with a mother that was always working. As a result, he had no choice but to grow up faster than most kids. Leonard was the Executive Director of Housekeeping at the Seven Oaks Hospital until his retirement. He had been involved in many organizations throughout his life including: Canadian Mental Health, Masons, B'nai Abraham Synagogue, the Housekeeping organization at the Seven Oaks Hospital and was the co-President of Israel Bonds. Leonard has two children from a previous marriage - Robyn Wiener, who lives in Vancouver, British Columbia and Mark Wiener, who lives in Kitchener, Ontario with his wife Lorie.

Leonard's parents, Harry and Vera Wiener, both immigrated to Canada in the early 1900's. Harry worked as a printer technician and Vera worked various jobs, retiring from Miller Hatchery as a "Chick Sexor", and was involved with B'nai Brith Women and Hadassah. Harry was a kind and patient man who enjoyed fixing small appliances, working on old cars and spending time with his beloved grandchildren. Leonard and his mother had a very close relationship. She was an excellent chef who loved to entertain and I will never forget when I asked her to teach me how to cook, she gave me the best compliment a mother-in-law could give - she didn't have to show me how to cook!

I have been blessed with countless personal achievements throughout my life. At the age of 44, I decided to go back to school where I graduated with an honours degree from Success Business College. I worked as a Supervisor at the Bank of Montreal before having children and later on returned to work at the Royal Bank until my retirement. My greatest achievement in my life was giving birth to and raising my children and seeing how successful they are today.

I have two children from a previous marriage - Stuart Kay, (who lives in Burlington, Ontario with his partner, Denise) and Selyna Kent, (who lives in Winnipeg, Manitoba with her partner, Doug) and four wonderful grandchildren: Caitlyn, Jared, Jessica and Zachary.

I have been involved in many organizations throughout the years, including B'nai Brith Women and Beth Israel (serving as President of the Sisterhood). I worked with Down Syndrome children, visited patients at the Manitoba Rehab Hospital and assisted with seniors and expectant mothers at Mount Carmel Clinic. When I'm not volunteering my time and services, I enjoy working with clay, learning to play the piano and sketching.

I would like to be remembered as a caring wife, mother and special Baba to my four grandchildren. I wish my family good health, much happiness and many accomplishments throughout their lives and to continue to maintain their Jewish heritage and identity.

The reason I decided to sign the Endowment Book of Life at the Jewish Foundation of Manitoba is because I wanted to give back to the community. Sadly, Leonard passed away in June 2008, but I know that he would have wanted me to sign the Endowment Book of Life for the both of us. The Jewish community in Winnipeg is decreasing and we must ensure a strong and viable future for our community in order to maintain our heritage.

My wish for the Jewish community is for the creation of additional facilities such as the Simkin Centre and that new institutions continue to be established so that our Jewish heritage continues to persevere.