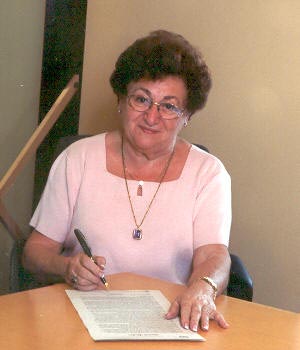 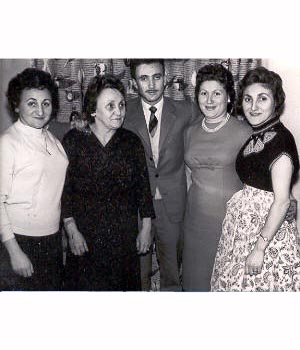 Annette at left with her mother and three siblings Daniel, Solange and Cecile, Paris 1960 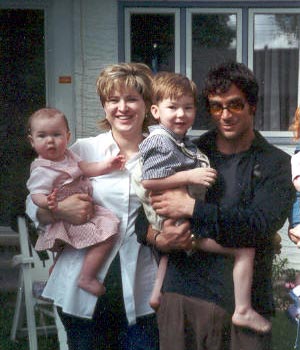 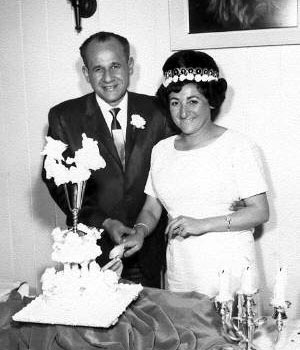 I was born in Lorraine France some 70 years ago. My parents, Nehamah (Einhorn) and Ezekiel Leuchter were born in Poland but after one pogrom too many, moved to France in 1926. It was there that they married and had their four children, Solange, Cecile, Annette and David ("Daniel").

When World War II began, we evacuated our home near the German border and spent the war years in central France, where my uncles lived. Our house in Lorraine was subsequently pillaged by the German army, and then destroyed when a near-by arsenal was bombed.

In June 1943 I was staying with my aunt caring for my 10 month-old cousin, whom I adored. My uncle had been warned that the Gestapo were coming and he was being hidden by Gentile friends. My grandfather, who was very orthodox, continued to open the shutters for his morning prayers, and when the Gestapo came at 6:30 one morning and saw them open, they began to pound on the doors. The building caretaker went to the door and convinced them we had escaped through the open window. I kept plying the baby with bottles to keep him quiet at the far end of the hall. My mother later sent a Gentile friend to come and retrieve me, I was so afraid to go outside.

When my father joined the army, we children became wards of the government and were sent to a "fresh air camp" - we worked on a farm. Our mother, fearing for our safety should we leave there, offered to pay the farmer the same as what the government was paying him if he would keep us there. My sister was 16 and had false papers so that she was able to work in the city - it was her earnings that kept us on the farm. I also went to school during that time. The Germans were looking for French people to work in forced labor - their own numbers were dwindling. Many men hid in the forest and we young people brought them food at night. The Germans caught wind of this and we became desperate for an adult to confide in. My sister suggested Mr. Martin, our schoolteacher, and one day after school we shakily told him that we were Jewish and afraid. He assured us that he would protect us. It was near the end of the war so his protection was never required, but only a few years ago I visited with Mr. Martin in France, by now an old man, and he told me that he had been a courier for the French freedom-fighters, often out on his bicycle until the wee hours of the morning, arriving back home just in time to change and come to the school. He said that while that work had been important to him, it had been even more important to him to keep us safe. He was a real "mensch".

After the war, my mother came to get us. My father had passed away in 1943 of cancer. My grandfather died in Auschwitz. My grandmother was chained to a fellow Jew and thrown into a fire in the center of their shtetl. Many of our friends and other family members had also perished. Life would never be the same.

The next summer I attended a Jewish camp. When a counsellor became ill, I was asked to help with the young children. The director noticed my love of children and suggested that I go to Paris to take some courses in childhood education. These studies led to eight years working in homes for Jewish children, mostly orphans who had been cared for by various religious institutions during the war. These were happy, rewarding years, but by now I was 28 and unmarried and my mother was becoming quite concerned. She convinced me to move to Paris - "something more mainstream" she said.

It was in Paris that I met a Mr. Max Beyers from Winnipeg Canada at the home of a family friend, Mr. Grünberg. We had a date the next day so he could get to know me better and sometime later he sent me an airline ticket to come to Canada. All this attention was not for himself but for a young man whom he loved like a son, Daniel Butler. His plan worked and shortly after arriving in Canada in 1965, Daniel and I were married. Since 1943, Daniel had been operating a business originally established by Mr. Beyers and Mary and Louis London. The Londons were Daniel's adoptive family. The business was "Playland" at Winnipeg Beach, which we then operated together until 1997. The Londons became my adoptive family too and they are very special to me.

Daniel and I adopted two children, Nadine and Marc. He was a wonderful father who adored his children and later his grandchildren, Liam and Danielle. He was a warm, passionate man, dedicated to his business but in love with his family. I am still grieving Daniel, who passed away in June of 2001.

Presently I am very involved at the Rosh Pina Synagogue where I run the gift shop, serve as President of the Sisterhood and do calligraphy for the Golden Book. When I have time I love to knit. I have been blessed by volunteer work which I find very rewarding, by loving friends, and most of all by a wonderful family.