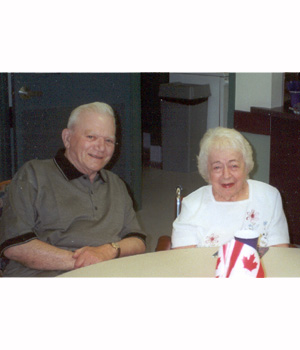 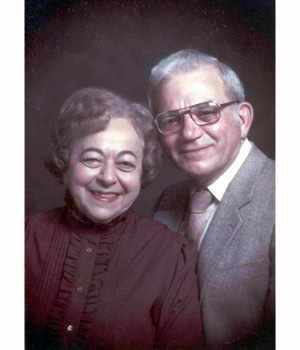 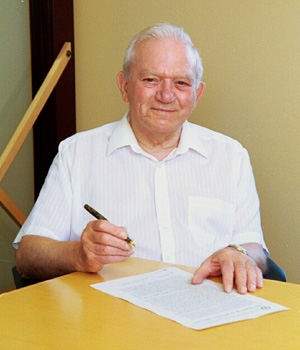 Jack Moscovitch signs the story for the Endowment Book of Life

Jack was born in Winnipeg in 1920 and grew up on Enfield Crescent in St. Boniface. It was in St. Boniface that his father, Charles Moscovitch, and his father's two brothers, Meyer and Israel, co-owned and operated the local department store, La Maison Blanche, located at the corner of Provencher and Tache. Jack's parents, Charles and Henrietta (Moscowitz), cousins, who came separately to Canada from Romania via New York, married and had four children, three boys, Jack, Ed and Lawrence (Ari Maoz) and a daughter, Pearl (Statler). When the opportunity arose to become a sole proprietor of his own store, Charles moved his family, first to rural Saskatchewan and then to rural Manitoba, returning to Winnipeg in 1938 where the family settled into the Baltic Apartments on Manitoba Avenue.

Jack graduated from Norwood Collegiate, receiving his Hebew education, like many others at the time, at home from an after-school tutor. He was a member of Young Judea, a group that reinforced his socialist leanings with it's stated concern for the welfare of the individual. The family belonged to Shaarey Zedek Synagogue and despite growing up in St. Boniface and rural communities, Jack always felt and lived a Jewish lifestyle.

Anne Rosenberg, the daughter of Max and Bella (Hollenberg), grew up in the north-end on Manitoba Avenue and attended William Whyte and St. John's Tech. Her father Max was a partner in a prospering garment factory where Anne was employed after leaving high school. During this time Anne's mother, Baila, took care of the household needs of their eight children. Anne's siblings consist of her sister Betty (Lang), who had come across from the old country with her parents, Jenny (Glassman), Jack, Ike, Lil (Drabinsky), Ettie (Frank) and the youngest brother Harry. Harry and Jack's brother Lawrence, who were both active in Young Judea, introduced the couple to each other while they both lived on Manitoba Avenue. Anne's father died unexpectedly in 1940, early in their courtship. He was just in his early '50's, and his sudden passing left a void in his young family.

A year later, on August 10, 1941, Jack and Anne were married. The newlyweds lived in Kamsack and Estevan Saskatchewan, and later had to cope with Jack's military service that took the couple to Kingston, Ontario. It was there that their first daughter Marcia (Secter) was born. After leaving the military in 1945 Jack took advantage of the veterans' educational opportunities and entered the University of Manitoba. With one daughter and his second one, Roberta (Weber) on the way, Jack put his studies aside and returned to the work force. He joined Boston Clothing and later, Genser's Furniture, before taking the family to Fort William for four years. They returned to Winnipeg where Jack enjoyed a five-year career with London Life Insurance. At 47 years of age, Jack joined the Federal Government, working with the Canadian Pension Plan. He describes this position as his most rewarding employment since it allowed him to work on programs that focused on the future needs of individuals. During this time he resumed his studies at the University of Manitoba, finally achieving his goal to graduate with a Bachelor of Arts degree. Anne, who had stopped working to raise her children, managed the household and was involved with Jack in a local bridge club where she had a reputation as a skilled player. She also loved to knit to the delight of her grandchildren and even great-grandchildren, while Jack would build toys for his grandchildren in his workshop.

Jack was always very involved in his community, spending ten years in the Seven Oaks School Division as a trustee and chairman of the School Board. Jack organized a Neighbourhood Watch and delivered Meals on Wheels. He is a charter member of the B'nai Brith Garden City Lodge of which he is a Past President. Jack's interests included curling which he enjoyed participating in regularly in West Kildonan. Anne supported Jack in all of his endeavours and pursued her own interests in election scrutineering. Jack was instrumental in having trees planted along the boulevards of Garden City. He proudly recalls how, with his urging and leadership, West Kildonan property owners each put up two dollars so that a landscaper would do the boulevard planting. This forerunner to citizen coalitions convinced future land developers to include a budget for landscaping.

Reviewing his sixty-year marriage to Anne, Jack describes their life together as a partnership and a complete team, always being there for each other. They both enjoyed playing duplicate bridge and Scrabble, enjoyed their visits to Israel, France and North America to visit family, and agree that their grandchildren and great grandchildren are a very important part of their lives. With Anne's encouragement, Jack has organized four "Moscovitch" family reunions, in Vancouver, Ottawa, Albuquerque and Winnipeg. He continues to keep the family in touch with each other and with their past, through the creation of albums and compilations of stories and memorabilia. He hopes that there will be opportunity to have more reunions, as family is the bedrock to Jack and Anne Moscovitch.