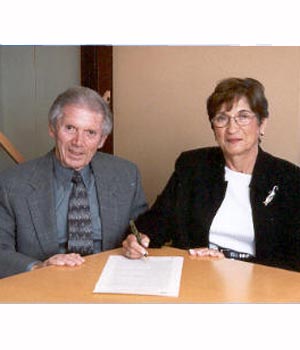 Ed and Anna sign their Endowment Book of Life story 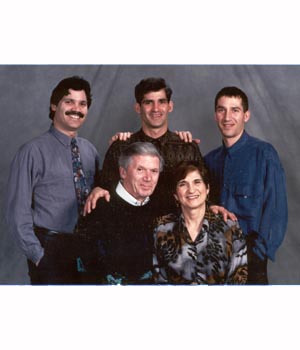 Ed and Anna and sons Steven, Bill and Howard 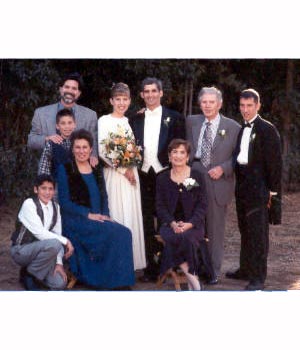 The Moscovitch Family — Steven and Sharon with Noah and Daniel, Bill and Mari, Ed and Anna and Howard

Anna and Eddie Moscovitch are happy with the way their lives have evolved. When reflecting upon all that they had to endure as children and as adults, they both feel a sense of satisfaction with the results.

Anna was the only child born to Eva (Braginsky) and Sam Weinman both who had been married previously but had lost their spouses either to the Russian revolution or illness. Sam, with his two children married Eva with her one son Bill. This blended family is what Anna was born into. When reflecting upon her parents, Anna remembers her father as being a quiet gentle individual who earned a living by operating a series of grocery stores all to varying degrees of success. She remembers how at the end of his life he struggled but lost to the ravages of Parkinson's. In contrast to his personality Eva was a pistol. She never seemed to stop. She experienced a great deal of tragedy in her life, from the loss of her husbands to the death of her son Bill in World War II. Nonetheless this leftist-leaning woman had an undiminished spirit and met head on whatever life presented.

After a one-year stay at a Labor Temple kindergarten, Anna was sent to Aberdeen and then St. John's High School for her education. She attended Talmud Torah in the evening and recalls enjoying and doing well in school, which was the center of her social life. Surrounded all her early years by Jewish friends, in a Jewish home and a Jewish environment Anna cannot recall ever feeling anything but Jewish.

This is in contrast to her husband-to-be, Eddie Moscovitch. Eddie (a leap year baby-February 29th) was one of four children born to Charles and Yhetta. The three brothers, Jack, Eddie and Lawrence and one sister Pearl, grew up in Norwood (151 Enfield Crescent) where their father was a part-owner of a department store along with his two other brothers. Eventually Charles, wanting to run his own store, moved to rural Saskatchewan (Pontiax) and then rural Manitoba (Durban) before coming back to Winnipeg. The 1930's proved not to be the time to earn a living in a rural community. Graduating from St. John's, after working part-time at a number of jobs so that he could help support the family, Eddie worked for Kay's Ltd. until he joined the Air Force. This eventually afforded him the opportunity to attend university from which he graduated with a Bachelor degree in Social Work.

Before attending university Eddie began seeing Anna, who after a series of positions in the local garment industry decided to move to Detroit. If not for Eddie, Anna would have stayed in Detroit. Instead she returned to Winnipeg, married in 1946 and Eddie started working on his first degree. Upon graduation they moved to Regina for a year with their newborn son Steven in tow. One year later they were now off to Detroit where Eddie earned a Masters of Social Work degree and worked for the Jewish Family Service in central Detroit. They returned to Winnipeg, now with a second son, Bill to start work with the Children's Aid Society of Winnipeg. One year later Eddie took charge of the Jewish Child and Family Service. This started a twenty-five year relationship. During his tenure Eddie was instrumental in making the JCFS one of the more progressive social agencies of its day.

Being the head of JCFS for so many years provided Eddie with many opportunities for controversy. In 1981 Eddie left JCFS and began working at the University of Manitoba doing a combination of lecturing and field supervision. Eddie's expertise as a field supervisor came not only from his own work experience but also from his time spent training many of the unschooled social workers when there were many untrained but practicing field workers.

At this pivotal junction of his life and with the support of Anna and his grown sons, Eddie began a private practice, which developed into a thriving endeavor. Upon reflection Eddie and Anna are satisfied with how they lived their lives.

Careers and recognition aside, their greatest sense of satisfaction remains from their three sons, Steven, Bill and Howard. They feel that they have raised three caring and supportive sons. Although only Steven resides in Winnipeg, Anna and Eddie believe that the brothers are very close. They believe this is due to being raised in a home where the importance of respect and concern were stressed over personal success and recognition.