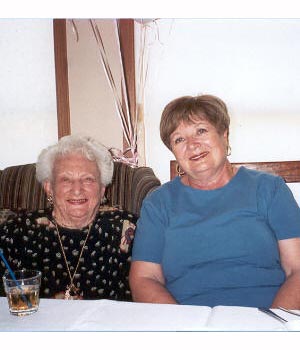 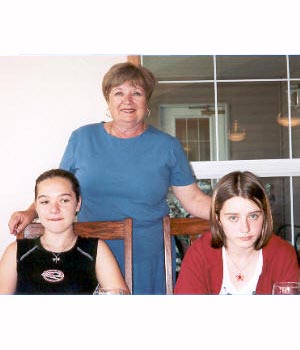 Ann's great-granddaughters Rhea and Frayja with their grandmother Patty Malchy 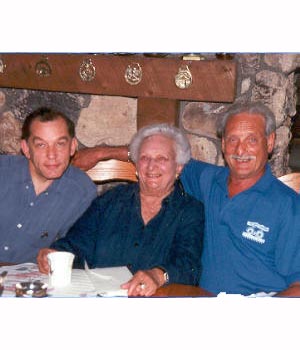 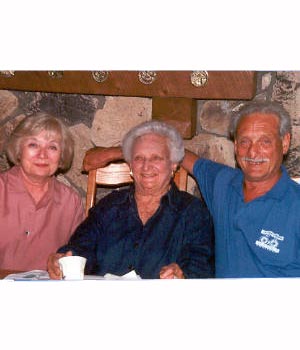 Ann with her daughter Patty and son Elliot 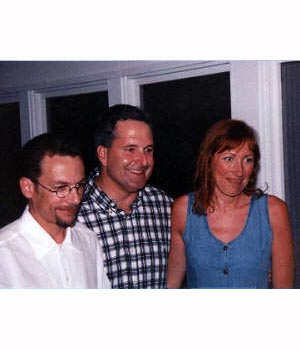 "I remember so far back, sometimes it scares me," begins this tiny great-grandmother, with a twinkle in her eye. And at the age of 98, the memories she has span decades of change and fascinating life experiences.

She was born Ann Koren in Odessa, Russia in 1904. When she was 8 months old her parents Isaac and Pearl (Galpern) decided it was time to emigrate. Seattle Washington was their ultimate destination but they travelled first to Winnipeg to see relatives. These relatives, who were involved with the Winnipeg Jewish Society, encouraged them to stay ... "we'll buy you a few cows," they said, "and you can start a small dairy." It seemed like a good idea at the time - until their first Winnipeg winter!

They settled in West Kildonan in a small "shtetl" inhabited by other Jewish immigrant families. They knew very little about dairy farming, but it was a warm, close-knit community. Two more children were born into the family, and when the youngest was just 6 weeks old Ann's father unexpectedly passed away, leaving her mother with six mouths to feed. Deciding to branch out into grain farming, she moved her family a little further north to the area that is now Middlechurch, and began eking out a living from the bald prairie. Water in the spring, snow in winter, it was a very harsh life made easier only by a community life where each helped the other. Jewish holidays were always an all-community affair, and Ann has only fond memories of her childhood years.

Ann attended John Black and Centennial elementary schools. At the age of 14 she took a year off school to help care for the family. $7 a week was a good wage for filling out mail-order requests for liquor, but it was a tiring year living in West Kildonan and working on Rupert Street in Winnipeg. Ann was always happy when someone offered her a place to sleep in the city so she did not need to take the long streetcar ride home. She returned to school and for the next three years took the commercial course of studies at St. John's Tech.

After graduation, Ann was employed as stenographer for Northwest Hide & Fur until her marriage in 1925. At a Jewish friend's wedding, she met George Elliot Dowbiggin from Montreal, and they were married a short time later. Having met him at a Jewish wedding, there was no consideration given to the fact that he might not be Jewish - suffice it to say that for a time the young couple was the talk of the town. George converted to Judaism and it helped that he already spoke fluent Yiddish having been raised among the Jews of Montreal. George was employed in the motion picture industry and worked for Famous Players theatres as their western division booking agent.

In 1927 the Dowbiggins had a son, Elliot, and ten years later a daughter, Patty (Malchy). Ann describes these years as being very tough and very busy. During the depression George lost his job, Ann's sister Rose, who was blind, and brother Max came to live with them, and their home in north-end Winnipeg was crowded and poor. "I cooked, I baked, and I served, and we survived," Ann says, "but it was never easy."

Ann's mother too was continuing the challenge of survival. She gave up the farm and moved into the city on Alfred Avenue. Early in the morning she would take the streetcar to Eaton's downtown and buy dry goods that were on sale. She would take the streetcar back home, load up her wagon, and go out to West Kildonan where she knew people and could peddle her goods. She spoke little English and could not read or write, so when she would arrive home in the evening she would recite her sales to her children who dutifully kept her records. She was a tiny woman, but very determined to live an independent existence.

In 1946 Ann and George moved their family to a small house on Waverley Street in River Heights. Although life was busy, Ann spent time volunteering for Hadassah and National Council of Jewish Women. She kept track of the family finances, a skill which helped her adjust when her husband passed away in 1983. She remained in their home until 1995 ... 52 years in the same house! ... and then on her own made the decision to move into "The Waverley" ("I liked the name," she says with a smile). She chuckles when she tells the story of how, unbeknownst to her children, she sold the house, making all the real estate and financing arrangements on her own. "I was a liberated woman long before it became popular, and fiercely independent." In fact, when she stopped driving car at the age of 95 "it was not because I had to," she says, "it was only because I chose to."

Ann loves her life at "The Waverley" where she greets each day - and every bridge game, she adds - with a twinkle in her eye. She has six grandchildren and ten great-grandchildren who, she says, are the "icing on the cake". She has wonderful friends, some of whom have been dear to her for over 80 years! "And I have a wonderful community. The Jewish community has helped so many people that need help, and I am proud of this community."

"As an immigrant family, we had nothing but the will to survive and a community that cared," says Ann Dowbiggin. And survive she has!