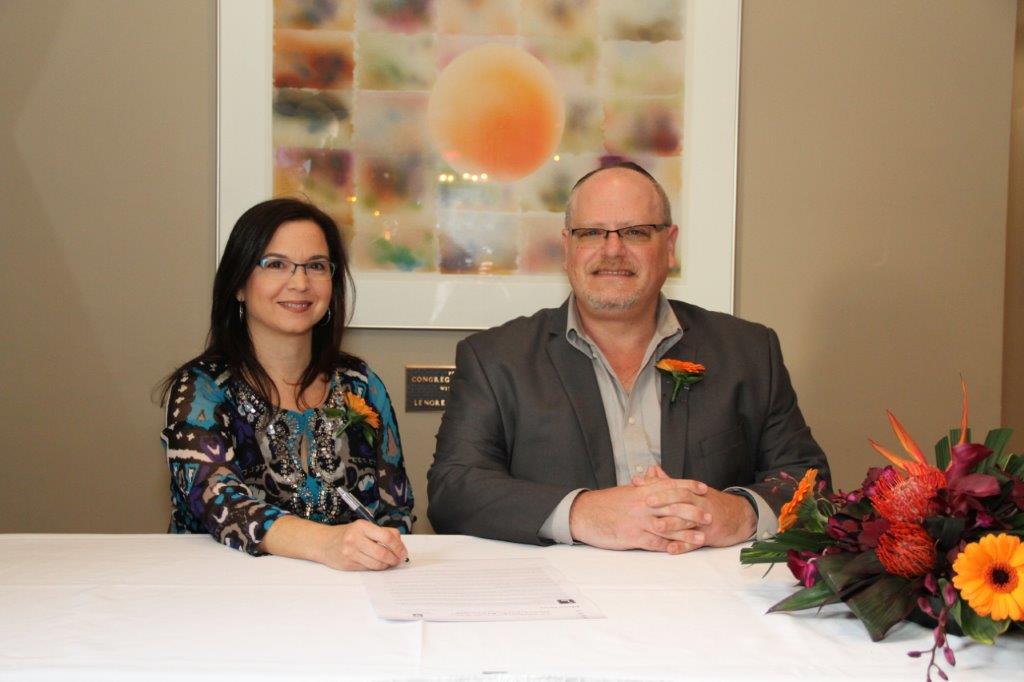 When Hernan Popper and Andrea Roitman arrived in Winnipeg for an exploratory visit in early 2002, they thought right away that this could be the place to call home. By the end of that first day in Winnipeg, they knew that it would be.

Andrea and Hernan are among several hundred Argentinean Jews who have settled in Winnipeg in the last 15 years and immersed themselves in the local Jewish community. Grateful for the welcome they received upon their arrival in 2003, and the opportunities that they have enjoyed, they are eager to give back to the community by participating in the Endowment Book of Life.

Andrea was born in Buenos Aires in 1969 and raised in that city. Her parents, Esther Koza and Eduardo Roitman, were also born and raised in Argentina, and still live there along with her younger sister and her family. Growing up, Andrea celebrated Jewish holidays with grandparents and relatives and attended a Jewish day school for several years. She also lived in Israel for a time as a young adult.

Andrea trained as an x-ray technologist in Argentina and worked there for several years before coming to Canada. In Winnipeg, Andrea had to prove her proficiency in English and then recertify as a technologist, but since then has enjoyed regular employment in her field. She currently works for Cancer Care Manitoba's Breast Check Mobile Unit, and she loves helping women with the great service that this program delivers across the province.

Hernan, 46, was born and raised in Buenos Aries as well, as were his parents, Roberto and Daniela Popper z'l. His brother and sister still live there with their families. Although Hernan did not have a formal Jewish education, he did participate regularly in Jewish youth groups and activities.

Hernan continued in the telecommunications field after moving to Winnipeg. In fact, he lined up a job in advance and was working two weeks after his arrival. He has since moved to other employment in marketing and management, including senior positions at Manitoba Telecom Services and the Western Canada Lottery Corporation. After a short stint working in the non-profit industry, including at the Jewish Federation of Winnipeg, he launched his own telecommunications consultant practice in 2016.

Thankful to the Jewish community for 'changing their lives,' Hernan strives to give back at every opportunity. As a YAD/J-PEG Jewish Leadership program alumnus, he joined the Jewish Child and Family Service's board of directors. He also currently volunteers for the Jewish Federation and Rady JCC, is involved with the new Jewish Business Network, and recently joined the JFM's Endowment Book of Life committee.

Hernan and Andrea were married in 1995, and made the decision to leave Argentina because of the disintegrating political and economic climate there in late 2001. At the time, their son Martin was one year-old and they wanted a more secure future for him. Martin is now 16 and a student at Vincent Massey Collegiate, and is entertaining different ideas on his professional future. Their daughter, Samantha, who was born in Winnipeg a year after their arrival, is 12. She attends HGI, Whyte Ridge's middle school, and loves tap dance and baking.

They wanted to live in a place where they would feel safe, be able to spend quality time with their children, create valuable connections and get involved with their community. Winnipeg has definitely become that place.