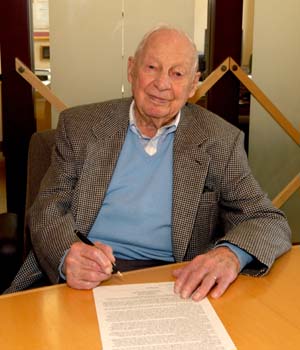 Alvin Raetzen signs his story for the Endowment Book of Life 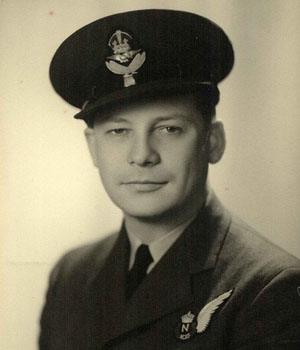 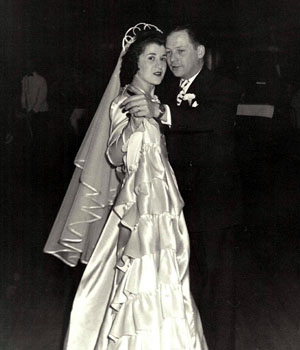 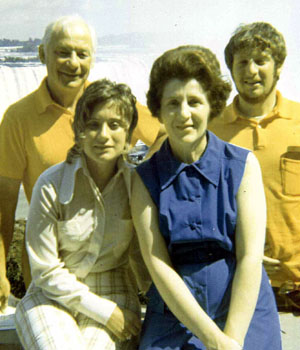 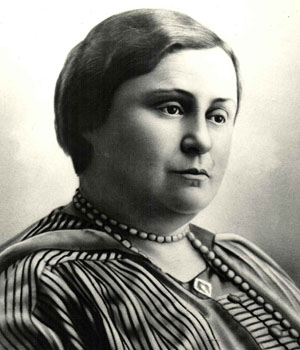 Alvin's story begins in 1880 with the birth of his mother, Chana Shapera, in Lithuania. Her family, which until then could trace 40 generations of orthodox Rabbis, were disciples of Theodore Herzl. He was promoting the migration of Jews to Palestine which, at the time, was under Turkish rule. The family travelled by foot across the continent. Arriving in Palestine and wanting to start a colony, they negotiated a piece of land from the Ottoman landowners. It took five years to dry up the land and plant crops such as orange trees and grain. The Colony they founded was Petah Tikvah, which went on to become the birthplace of the Labour Zionist movement and one of Israel's most populous urban centres.

In 1893, Chana was courted by a young man by the name of Dizengoff (who went on to have the main street in Tel Aviv named after him!) They were considering marriage, but before they could become engaged, an older sister of Chana's died in childbirth in Russia. She left five sons and a daughter, some Chana's age, and Chana was sent to be the new wife of Mr. Shimson "Samuel" Bay, her late sister's husband. Twenty-five years her senior, Mr. Bay treated her well, and they had two sons together.

It was the time of pogroms in Russia. When Mr. Bay was imprisoned for withholding the whereabouts of his sons, Chana fled to Paris with her two sons and from there to Canada, where some of the older Bay children had immigrated earlier. They had been given land near Dauphin, Manitoba and so farmed for awhile and then turned to other enterprises.

While she continued to wait for Mr. Bay, Chana and her sons moved to Winnipeg where she scrubbed floors to earn a living. Mr. Bay did eventually arrange for passage to Canada but the long trip took its toll and on the train heading west, at Fort William, Ontario, he died of heart failure. Only his body was returned to her, and he is buried in the Shaarey Zedek Synagogue, identified as "Simpson Bay".

Chana later married Jacob Raetzen, a widower with four sons: Sam, Abe, Aaron (Harry) and Nathan. Together, they had four children: Max (1911), Alvin (November 22, 1912), Bella (1915) and Leslie (1918). Jacob had come to Canada from Russia and had a liquor store on Logan Avenue. When World War II began in 1914, it became illegal to sell whiskey and his business failed. He moved his family to Canora and then Watrous, Saskatchewan, where he established a confectionary, complete with soda fountain, gramophone and ice cream parlour.

As a young man, Alvin joined the Royal Canadian Air Force and earned the rank of Flight Lieutenant (Captain). In a mission over Germany his plane caught fire and he parachuted to his fate as a Prisoner of War. He counts himself fortunate that his camp was operated according to the guidelines of the Geneva Convention, but for over a year he endured the hunger, loneliness, and humility of prison life. The camp was ostensibly freed when the Russian army marched into Berlin and the German captors fled, but Alvin could not wait out the time it would take until travel was safe and left the camp on foot to make his way to safety. He remembers like it was yesterday the joy and relief at his first sight of a jeep bearing American soldiers.

When he returned home, knowing that his official papers were "on the way", he claimed to be a Californian and so was sent by Super Chief train across the continent and had a good time visiting family in California. As he was to receive his discharge in Vancouver, when he arrived there he pretended to be angry, saying that they had sent him to California instead of his home in Windsor, Ontario (where his mother lived). Apologetically, the Air Force put him on the next train home - in a sleeper car, on the preferred lower bunk and, as a favour, with a stop in Winnipeg! He visited his family in Winnipeg and two of his nieces arranged a blind date with Abigail Levinson, the daughter of Hesse and Molly Levinson. He decided to meet her first, called her up and said, "I'm coming over, will you make me a cup of tea?" She said yes. Both she and her father were impressed by this Air Force charmer. The date at the Fort Garry Hotel for dinner and dancing was a success and Abby and Alvin soon became engaged. Alvin was discharged from the Air Force on October 1, 1945 and they were married on December 27, 1945.

Abby studied Home Economics and had earned the Gold Medal in 1940. She worked at Deer Lodge and, during the war years, for the RCAF treasury in Ottawa. Alvin worked as a manufacturer's agent and developer. They had two children.

Daughter Anne Raetzen lives on Childs Lake in the Duck Mountains of Manitoba. She is a social worker, now based out of Dauphin, but for many years based in Rankin Inlet where she was the regional supervisor of social services for the government of Northwest Territories. She is married to David Milani, a marine biologist. Son Mark earned his B.A. and LL.B. in Manitoba and Masters degrees from Harvard and Cambridge. He practices law in Vancouver, specializing primarily in family law and work on behalf of the disabled. He and his partner Andrea, who is a structural engineer, are also well-known yoga instructors.

Alvin has known both the joys and the trials of being Jewish. Among the joys are the richness of the Yiddish language and many long-time friendships. He has many interesting and intriguing stories to share, but chose here to start with his remarkable mother...