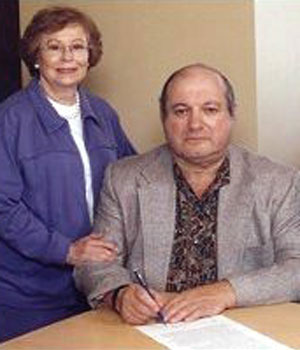 Allan's parents, Moishe and Sara (Bernstein) Shnier arrived in Canada in 1906 from Russia. Allan was born in Emerson and moved to Winnipeg with his parents in 1935. The family lived on Euclid Street, then Luxton Avenue. Allan was the youngest of twelve children - nine boys and three girls. He attended Talmud Torah, Luxton School, St. John's High, and University of Manitoba.

Allan has had a very successful career as an entrepreneur in floor covering, distribution, manufacturing, and as a real estate developer. He is Chairman of Metropolitan Equities Limited, Chairman and Founder of United Fibre-Bond Inc., United Wood Frame Inc., and Director of Gesco Industries Inc. In addition to these private undertakings, Allan has served as Vice-Chairman of the Manitoba Development Corporation and as a Director of a number of other companies.

Allan is married to the former Rhona Ostrow, whose parents were Charles and Anna Ostrovsky. She had one brother, Morry. Allan and Rhona are the proud parents of four children and grandparents of nine.

Their children are: Clifford, married Ruth-Anne Brown, and they have three children, Carrie, Kelly and Tammy, Sara, married Jeffrey Bernstein - they have three children, Jared, Noah and Lilly, Jordon's children are Jacob and Andrew, Gary, married Roxan Morry, and they have a son, Skyler. Rhona and Allan are very family centred and provide a warm and comfortable environment for their children and grandchildren. The family enjoys travelling and being together.

In participating in the Endowment Book of Life project, Allan states, "It is our belief that the future financial security of the Jewish community will be dependent in no small measure on the funds raised and distributed by the Jewish Foundation of Manitoba. The monies raised in this way will make certain that Jewish life and tradition will be perpetuated."