Alex and Sara Mitchell...As told by their daughter Ruth Copp 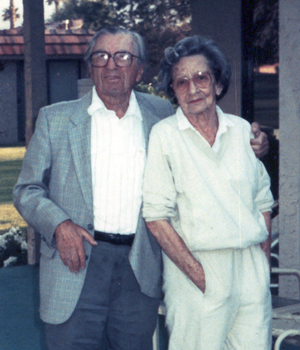 Alex and Sara Mitchell, Ruth Copp’s parents and the focus of her story 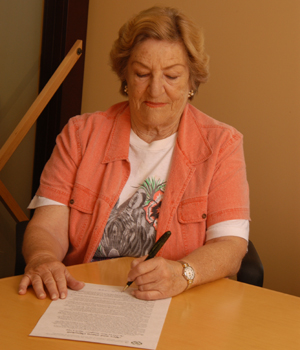 Alex and Sara Mitchell, Ruth Copp's parents and the focus of her story

"Without the benefit of formal education, my father learned to survive by his wits at an early age," says his daughter, Ruth Copp. The Endowment Book of Life is giving Ruth the opportunity to solidify the Winnipeg Jewish Community's memory of her parents, Alex and Sara Mitchell.

One of nine children living in poverty in the Lower East Side of New York City, Alex's older brother, Ed, decided that things couldn't be worse and hopped a freight train that eventually connected to a circus train that allowed him to find a job in the circus and travel around the country. Not surprisingly, the circus ran out of money while stationed in Winnipeg. Seeing it as a city of opportunity, Ed settled down and began to earn a good living in the grain business. Wishing to share his good fortune, Ed contacted his family and one by one they settled in Winnipeg in 1917.

Alex was a fifteen year old boy who knew only how to struggle, but almost at once he began to reap benefits from his efforts. He began in the grain business, where he earned a seat on the Winnipeg Grain Exchange at the age of eighteen. Eventually, he broadened his interests to include real estate. He formed a life-long partnership with Dave Copp to pursue the acquisition of property. While everyone wanted to own property on Main Street, Alex had the vision to recognize the potential of Portage Avenue. In time, this partnership became the largest property owner on Portage Avenue.

Alex began dating a poor but pretty girl from Winkler, Sara Danzker. After a somewhat stormy courtship, they married. The young couple honeymooned in California and returned to Winnipeg to live. They went from one successful venture to another, while the greater family had all done well. By 1930, they had all decided that the pastures were greener in Los Angeles and everyone moved again. In 1936, only Alex and Sara returned to Winnipeg. It seemed that Alex wanted to be on his own and Sara was lonesome for her siblings.

Alex and Sara and their two daughters, Ruth and Joan lived in a large house on Waverley Street. We children led a privileged life and attended private school, boarding in the winter when our parents went south. Our parents were of one mind as to how to raise children: strict and under considerable control. Doubtless that explains why my sister and I are fiercely independent.

Their seventy plus years of marriage blended that somewhat shy, lady-like Sara with the boisterous, outspoken, no-nonsense Alex. Bridge was their only shared hobby. Alex spent time everyday at the Hargrave Street Y. Sara busied herself with her children and her home. It was the comfortable, conventional marriage of its day.

My father, who thought himself a great judge of character, failed badly when initially meeting my sister's first husband, Alan Greenspan. Alan was characterized by Alex as a "nice boy who will never amount to much." My father's relationship with my late husband Leon was volatile but caring. Because of his rather inflexible principles and ideas, my father seemed, at times, a difficult man to like, but by the same token, he was more difficult to dislike.

In addition to all his other careers, Alex decided to become a retail merchant when the Second World War broke out. He opened Dayton's and later on he purchased a chain of 35 stores called Hollingsworth. All the while, he remained a stock market visionary: he practiced the "buy, hold and prosper" philosophy before it became a mantra. As a result of the family wealth, Sara entertained elegantly and dressed impeccably. The children were given the opportunity to travel and study wherever they wished.

Although not interested in testimonials, Alex and Sara were philanthropically inclined towards Winnipeg's Jewish and other community charities and especially towards Israeli needs. To this day, the family supports a cancer clinic in Haifa.

Both my parents lived until their 95th year. It was only at the end that they were unable to care for themselves, he due to ALS, she due to Alzheimer's Disease. Although significantly paralyzed, Alex never complained. To the end, his mind was always on his family and other responsibilities.

Alex and Sara loved and appreciated Winnipeg, the city in which they prospered and lived happily for so many years. There should be a lasting testimonial to the lives of such good people.