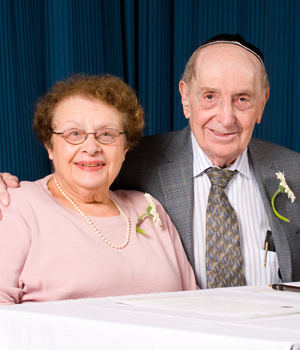 If only my mother were here. She was a terrific storyteller and could recount in minutest detail the plot of a movie she had just seen. She would have been happy to describe each facet of her family's pioneer life at the turn of the century and many other stories of life in the Rutman family.

Her name was Esther Rosen. She was the daughter of Harry Rosen, born in Latvia and Bayle Brina, born in Vineze Podolski Ukraine. She was born in Fargo, North Dakota in 1904 and a year later, with horse and wagon, they crossed the border into Canada and settled in Portage la Prairie, Manitoba. My grandfather opened a grocery store there.

My father, Samuel Rutman, was the son of Aaron Yidle Rotman and Chana Leah Miller. He came to Canada as a 17-year-old, in 1913. He was a self-employed, self-taught tinsmith with a creative mind. Because his work required him to install stoves and furnaces, he invented a locking device for tin stove pipes that would keep them from coming apart. He patented the design and it was used in the industry for many years.

I grew up on Alfred Avenue and St. John's Avenue with two older sisters, Cecile Meyrowitz and Bernice Burko. Our home was often filled with the delicious cooking and baking prepared by my mother. It was a warm convivial environment. My mother was an avid reader and we had interesting discussions about the topics of the day.

I attended Strathcona, Machray, St. John's Tech and United College. During my teen years, life revolved around sports like bowling and hockey, the YMHA, girls, and Scouts. I also belonged to Hashomer Hatzair. I did the typical things young people do — learned to ride a two wheeler, delivered newspapers, went to high school football games and made friends at teen canteens. I am still in touch with friends I made in those years.

In 1954 I married Cookie (Rose Lillian) Lavitt, the daughter of Clara and Isadore Lavitt. We have had 54 wonderful years together. We have had the joy of raising three fantastic children: Ray, Sondra and Fred. Ray lives in Edmonton and is a lawyer. His wife Linda (Floom) is a social worker. Their daughter Leah is in law school at Columbia University in New York and their son Evan is studying business at the University of Alberta with hopes of becoming a Chartered Accountant. Our daughter Sondra lives in Halifax. She is a nurse. Her husband, Jason Brown, is a Math professor at Dalhousie University. Their sons Shael and Zane are 13 and 11 and we just celebrated Shael's Bar Mitzvah. Our son Fred is an MBA living in Toronto; he has yet to find the "right one". We live vicariously through our children and grandchildren and are touched by their accomplishments and successes.

I supported my family by working in sales for London Life Insurance Company. Outside of work, I enjoyed bowling, golf, bridge and poker. I was involved with ORT, Hebrew Sick Benefit Association, and Beth Israel Synagogue. I served as Vice President on the Board of the Beth Israel Synagogue.

I hope to be remembered as a person who enjoyed and cared for people. I have tried to be generous not only in contributing to various charities and Jewish causes, but to be generous in spirit towards others. The most significant event in my life was when I married my dear wife. She has been, and continues to be, a supportive, loving influence. I am proud of my family. I wish them good health and the opportunity to see the next generation have as much or better success than the previous one. I have been enriched by my Jewish heritage and my hope is that our local community will be sustained, in fact flourish, and that anti-Semitism will diminish.

As the last remaining Rutman from our family line here in Winnipeg, our name is recorded here as "footprints in the sand". My mother would be pleased.