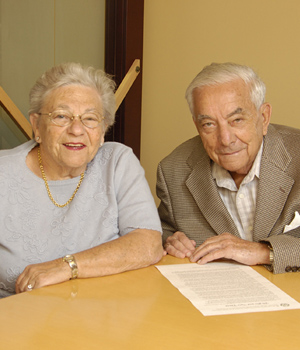 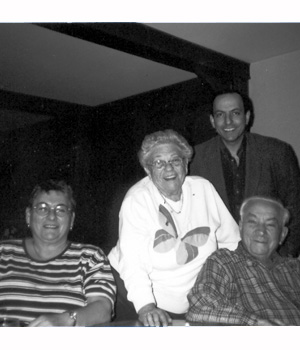 Agnes and Fred together with their children Kathy and George 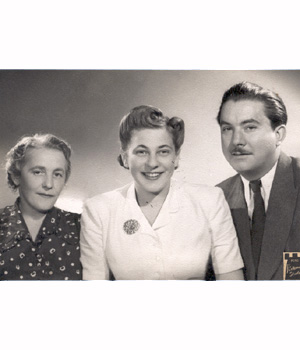 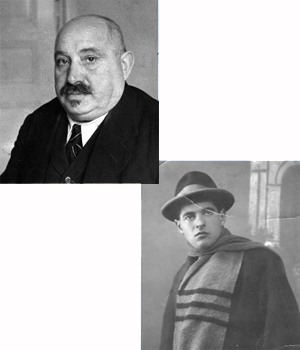 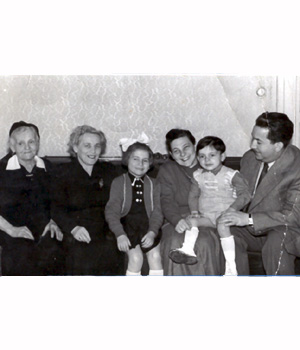 Four generations: Agnes's grandmother, her mother, and Agnes and Fred with their two children

As we begin to tell our story, Agnes and I feel that our life has been happy but not necessarily easy. To our children we wish a life as happy as our own, but hopefully a little easier. To our community we hope success in encouraging Jewish immigrants to come to Winnipeg, and the means to assist immigrants as they establish themselves here. It is because we understand that community and family are important, that we make our "promise".

Agnes and I arrived in Winnipeg in 1957 from Hungary, a country where the borders and government were always changing. I was the youngest of eight children born to Kathy (Feishel) & Ludwig Funk. Other than my brother, Michael, who died in Israel and my sister, Magda, who lived in Argentina, the rest of my family lived in Austria or Czechoslovakia, which was our birthplace.

Memories of my childhood start with my family operating a dairy farm, then moving into Bratislava where my father ran a store that sold dairy products exclusively - he was a specialist before his time. He was a good father and treated me especially nice, as I was the baby of the family. My mother was the more religious parent, she came from a rabbinical background and made sure that we had a Jewish upbringing.

I do not remember a moment in my life when I did not feel Jewish. Even though I had my Bar Mitzvah late, I always had a clear sense of being Jewish. As my brothers and sisters grew up, they moved to different locations throughout Europe. With the rise of Nazi Germany, I was placed in a Jewish work camp and eventually sent to Auschwitz in 1944. Most of my family died during the war.

After the war, I lived in Budapest and worked as a Chartered Accountant for an electronics company until 1957.

In 1946, after a chance meeting, I married Agnes Pollak, an only child, whose father had died in a concentration camp and who was raised by her mother, Marvina. Shortly after we married, we had two children, Kathy and George. Our lives were thrown into turmoil again when Russia invaded Hungary to quell the popular pro-democracy uprising. It was this invasion that convinced Agnes, who then convinced me, that our children's lives, and maybe even our own lives, would be better in Canada.

The move was easier said than done as we walked and bribed our way to the Austrian border. Relatives in Vienna assisted us in finding accommodations and part-time work there as we waited for permission to settle in Canada. When we arrived in Winnipeg in March of 1957, Agnes' relatives here were very gracious and opened their home to us.

Agnes and I began to rebuild our lives and provide the necessities for our children. She started working in the Freed & Freed factory while I began a series of part-time positions. As often happens in life, a chance meeting with Bill Minuk, a friend of our relative Harry Garfield, introduced me to real estate, where I spent the rest of my career. I enjoyed dealing with people, they appreciated my service, and I was recognized for my efforts in the industry. Sometimes I think that I retired too early, as I miss working with people.

Agnes and I now enjoy our circle of friends and the opportunity to travel, especially in the winter. We recognize that we are fortunate that both of our children are living in Winnipeg, although our two grandsons live elsewhere. Mark is a dentist in Detroit and Allan is completing his medical degree in Ottawa.

Our life in Winnipeg has been satisfying. Canada has allowed us to raise our family and live a life in relative security. Agnes' mother joined us in Winnipeg, our children quickly acclimatized to the new culture, and we were able to earn a living. This Endowment Book of Life program now gives us the opportunity to document our history and contribute to leaving the Winnipeg Jewish Community in a financially healthy position.