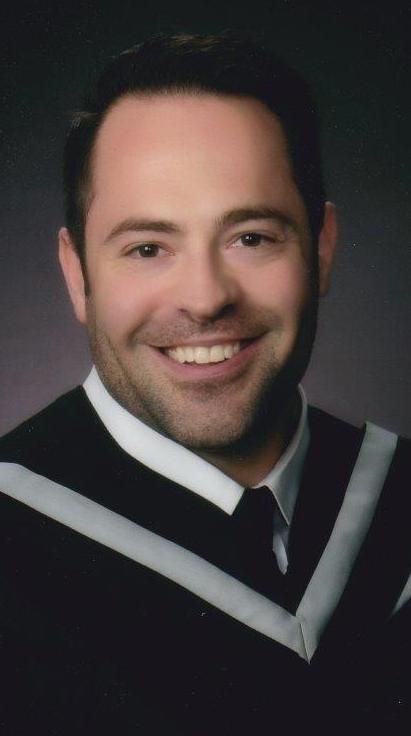 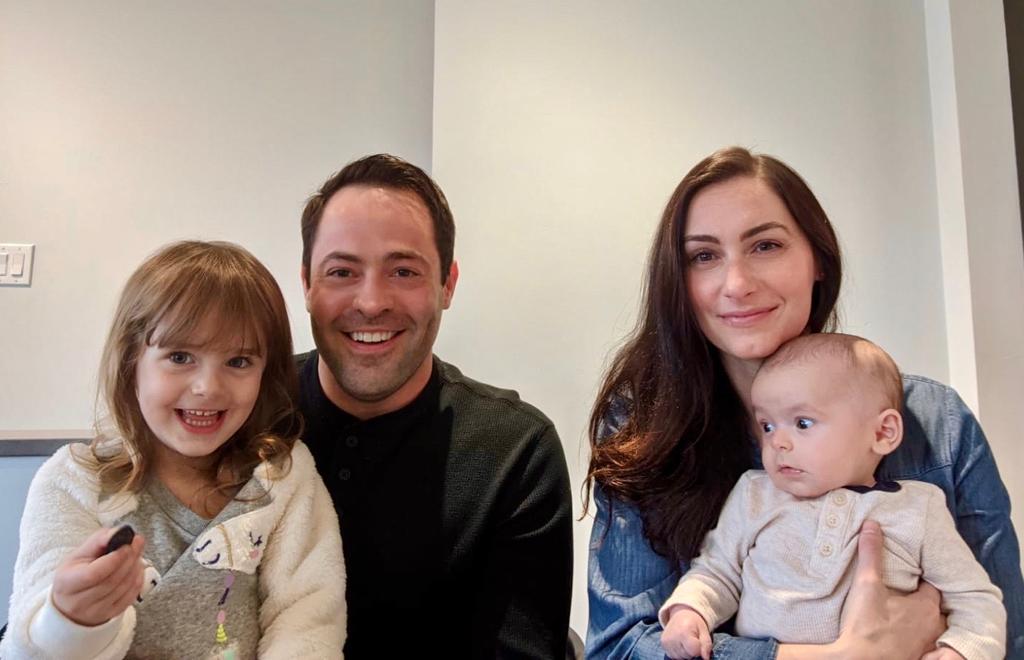 Adam Nepon with his family 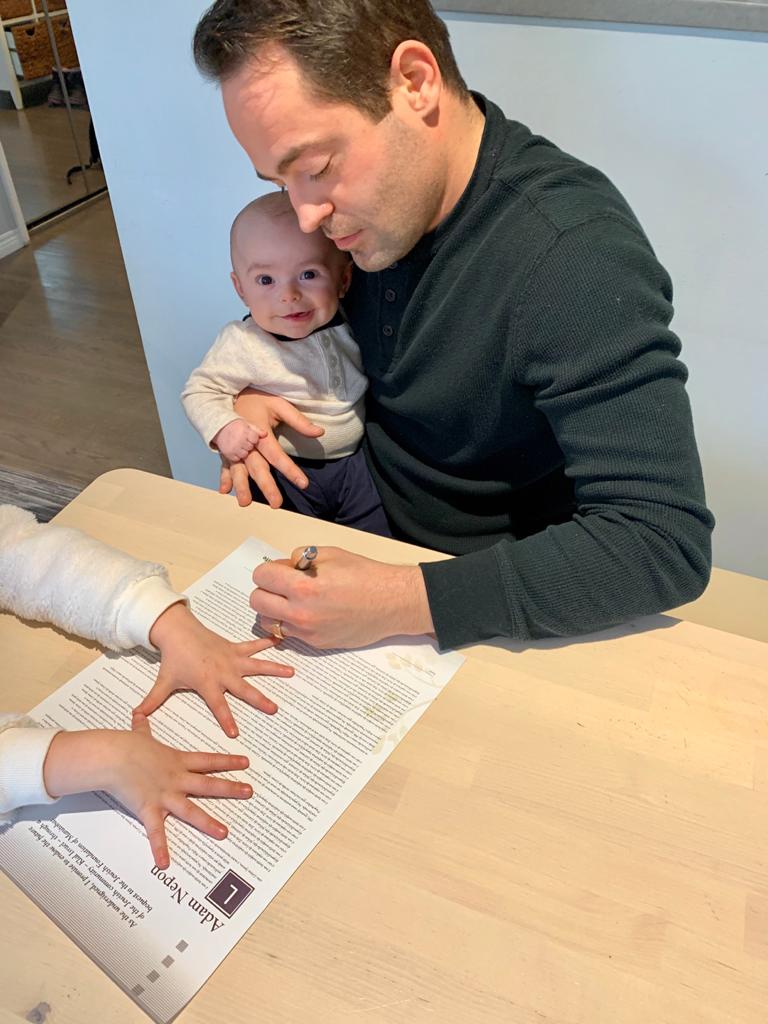 There is a Jewish proverb that reads, “A little bit of light pushes away a lot of darkness.” For Adam Nepon, a life of darkness seemed inevitable except for the light embodied in the self-sacrificing commitment of his mother, the encouraging consistency of a mentor as a young adult, and the opportunities made possible throughout his childhood by a generous community.

Adam is one of nine children raised by their mother, Leslie (Montagnon) Nepon.  Leslie, the daughter of Armand and Dorothy (Sims), had made the decision as a young woman to convert to Judaism. She was committed to raising her family in a kosher home, celebrating the holidays, upholding the traditions, and attending Shul. Leslie worked and sacrificed tirelessly to provide for her family. While raising Adam and his eight siblings she was eventually also tasked with managing the family business, Nepon Auto Body. Located at the corner of Salter St. and Dufferin Ave it is renowned for the large sign on the roof that greets drivers heading north over the Slaw Rebchuk bridge: “Welcome to the North End”.

As an adult, Adam has come to understand how richly his family has benefitted from the support of the Jewish community. All nine siblings were able to graduate from the Jewish day-school system. They were all able to participate in a wide variety of community programs such as Camp Massad, B’nai Brith Camp, BBYO, travel to Israel, and many others. He sees the continued support and vast resources offered from the community as having been the key “buffer zone” that kept him out of the government’s child and juvenile welfare system.  He is convinced that, had he not had this foundation of community support in his life, he would not have survived.

After graduating from Gray Academy, Adam continued on to university using his bar-mitzvah money and student loans to fund his education. School had always been challenging for him and was of utmost importance to his mother, but without any direction or guidance he was soon asked to leave the university due to poor academic performance. After working various jobs for a couple years Adam went back to school enrolling in Red River College’s business program. He then continued at the University of Winnipeg and while working towards his degree he met Marvin Peters; this would be pivotal.

Adam started working for one of Marvin’s companies immediately after graduating and at the same time Marvin had become a mentor. Adam’s work experience allowed him to strengthen his skills in human resources, business development, marketing, and management while gaining a fuller understanding of the unique challenges facing the organization’s Indigenous staff. Seeing the potential, Marvin continually encouraged Adam to pursue a Masters in Business Administration (MBA) which was inconceivable to Adam at the time. Eventually he applied, was accepted, but when it came time to choose his degree focus it was a choice that would also prove to be pivotal.

Occasionally growing up Adam heard comments to the fact that his ancestors were Indigenous, but never in a positive way. As a teenager Adam felt drawn to Indigenous music and art but because of the shame associated with this he suppressed this interest in his Indigenous heritage. Eventually, through historic archives and a DNA test it was confirmed that the Montagnon lineage went back to the Indigenous communities of the Red River Region of Manitoba. The knowledge that he was both Jewish and Indigenous took some processing but, the more he researched, the more he began to understand the unique perspective, opportunity, and responsibility this carried. When he learned that the Asper MBA program offered a degree major in Indigenous Business/Economy, and that he would be the first student to choose this path, it was understood this was HIS opportunity. While completing his degree, Adam had the privilege of presenting at the Global Conference on Indigenizing Entrepreneurship, and at the Rising Up: Graduate Student Conference on Indigenous Knowledge and Research. He spoke on his experiences as a graduate student who was new to being Indigenous and the research project he worked on for the Asper School of Business. The Overdue Diligence Research Project was designed to educate and inspire undergraduate business students about Indigenous business opportunities and culture in Manitoba.

With this overriding passion, Adam followed his interests, pursuing both academic and entrepreneurial opportunities. In 2016, while still completing his graduate degree, Adam founded MBA Consulting and Co., a business which allows him to use what he has learned to assist business owners or non-profit organizations improve efficiencies, attain clarity, and achieve success. In 2018 he obtained a MBA from the Asper School of Business with courses focused on Indigenous Economic Development, and Leadership and Organization; along with Sustainability, Marketing, and Innovation. Today, in an ‘Entrepreneurship Through Acquisition’ model, Adam continues his journey through entrepreneurship and business consulting.

Adam is humbly but justifiably proud of his accomplishments. Childhood in a single-parent home with eight other siblings had its obstacles, and he acknowledges each of them for their own unique journey. His siblings are Amber, married to Joe Cohen with three children Hannah, Jordan, and Asher (2009); Mara, married to Sal Pellettieri with three children Meir (2010), Simi (2013) and Yael (2013); Seth, married to Braeley Hobbs; Jonah; Rachel; Micah; Dana, and Meirav.

A large part of Adam’s motivation and inspiration was sparked by the tragic passing of his younger brother, Jonah. “I’ve been able to harness all the energy that builds from traumatic experiences and redirect it to positive outcomes, instead of self-destruction,” Adam says regarding his healing process. Jonah’s journey ended too soon when an aggressive form of brain cancer, Glioblastoma, took his life at the age of 29 in March 2013. Adam describes his brother as someone who lived life to the beat of his own drum.

Going through the smaller school of Gray Academy allowed Jonah freedom to develop his own interests, which lay primarily in music and people. After graduating high-school, Jonah founded a production company called Ghost Town Manitoba, a fitting name for a company designed to make the invisible visible. Jonah sought out emerging musicians in local markets, Canadian film makers, and visual artists while constantly on the lookout for independent touring acts. He produced local shows managing all aspects from contract negotiation, venue selection, marketing material and walking the streets putting posters up wherever he was allowed (and not allowed). He got excited about new sounds and the people who created them. Sometimes Jonah rallied an audience, other times it was a show for his self- interest and love of the arts. Jonah was selfless in giving a voice to people who didn’t have one. It was never about making money; it was always driven by his passion for music and the performing arts.

In 2010 Jonah moved to Montreal and in the six months he lived there he played an instrumental role in reviving the city’s interest of supporting their local independent artists. A year after passing Jonah would be honoured with a Memorial Show organized by Pop Montreal. Adam was able to attend, as well as document the performance and interviews with artists who gathered from across the country which he intendeds to compile into a short documentary. Jonah’s extraordinary love and commitment to the music industry was also highlighted in a book written by Sheldon Birnie called Missing Like Teeth: An Oral History of Winnipeg Underground Rock 1990-2001. The forward reads “For my old pal Jonah, and all others whose dance ended too soon. Wish you were here, pal.” As well, the University of Manitoba ’s radio station, UMFM, honoured Jonah in the naming of their new studio in March 2017.

Only 18 months apart, Adam and Jonah shared many childhood memories. They shared the entrepreneurial spirit and each had their own business dreams for the future. But, Adam admits, some of Jonah’s qualities he has only embraced since his passing – gratitude, empathy, and a heightened awareness of what life is truly about. Jonah’s heart was always with those who sought to have a voice – with children, with artists, with the elderly. He stopped for those less fortunate and helped those who were experiencing homelessness. He was an old soul in a young man’s body.

When Adam thinks about the future of Winnipeg’s Jewish community, he comes back to the word empathy. “It often seems,” he says, “that empathy stops at the borders of our own community.” This happens across cultures, but from Adam’s perspective, identifying both as an Indigenous and a Jewish man, he sees the possibilities of what could happen if empathy would cross traditional boundaries, and communities would begin to see all they have in common rather than how they differ.

Adam also hopes that the Jewish Foundation of Manitoba, as well as Jonah’s memorial fund, continues to grow. He sees himself as a “proven outcome” that the Jewish Foundation of Manitoba saves lives. By making the resources and services of the Jewish community possible for everyone, the endowment is doing the big-picture work of Tikkun Olam. Through Jonah’s memorial fund, “A little bit of light pushes away a lot of darkness.”