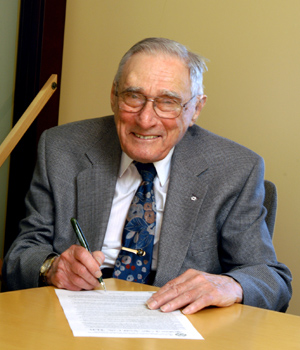 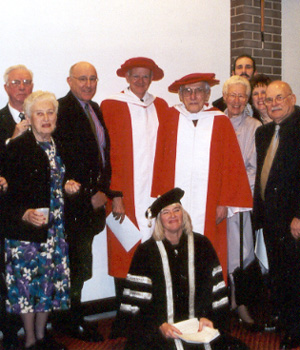 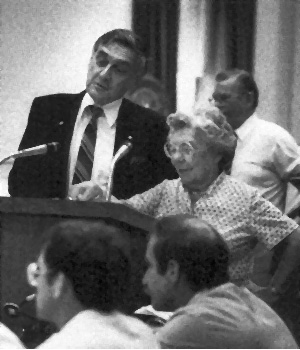 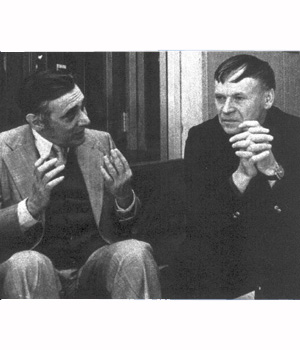 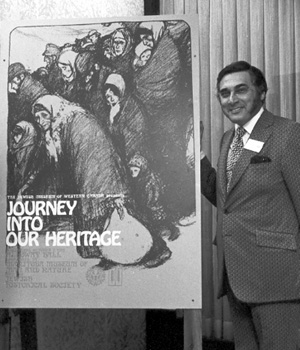 Abe Arnold with the "Journey Into Our Heritage exhibit poster", 1972

I was born in Montreal in 1922 into a nominally orthodox Jewish family, my mother kept kosher and lit the Sabbath candles. My father attended synagogue on the High Holidays and on Sukkot, Simchat Torah, Passover and Shavuot, if he didn't have to work.

At age six, my maternal grandmother enrolled me in a Hebrew school which soon became part of the United Talmud Torah. There I attended two hours a day on four weekdays, and Sunday mornings, until age 13. My grandmother was not frum, but orentlach (honest) in her approach to Jewish life. She kept kosher and lit the Sabbath candles, but beyond that she was not strictly observant. We often visited Grandma's on Friday evening to listen to radio programs since we didn't have our own radio until 1940.

My active interest in Jewish culture began at age ten, when my aunt enrolled me in the YMHA. I joined the B'nai David club, we read Bible stories, learned public speaking, and I began to write for the "Junior Beacon." In 1933, we became the Balfour Club, in honour of the Balfour Declaration, and in 1934, we became the Lord Reading Club (after Sir Rufus Isaacs, the Marques of Reading and viceroy of India). This reflected an expanded interest in Jewish and world affairs. The club continued until 1942 when it worked in support of the war effort and members began to join the armed forces.

In the 1930's our home celebrations for the High Holidays, Passover, Chanukah and Purim were very important. We lit the Chanukah candles, ate zudik haise latkes, received Chanukah gelt and spun the dreidl. I enjoyed my first theatre experiences in Chanukah and Purim plays at the Y, and don't ever remember wishing for a Christmas tree. At Purim we ate hamantashen, collected and gave shalech-mones, and drowned out Haman's name at the reading of the megilla.

The Passover Seder was our biggest celebration. My grandfather made charoses with nuts, apple and wine in his brass shteisl (mortar and pestle) and I took some home for our Seder. During Passover week we played with filbert nuts instead of marbles.

We ate boxer fruit on Tu B'shvat and cheese blintzes on Shavuot. I went to the synagogue for Simchat Torah, as well as for the High Holidays and sang in a Rosh Hashanah choir.

In 1933, I joined the "Y" Junior Congregation, and attended Saturday morning services. Saturday afternoon I returned to the "Y" and sang in the Havdallah choir. This was followed by a movie program for children, who (in Quebec) were barred from attending regular movies under age 16.

At 12, I became a cantor in the "Y" junior congregation, where my Bar Mitzvah took place at 13. I became an officer of the congregation, served as president, and learned to be a Baal Koreh. At 15, I became disenchanted and gave up on religious practice. I remained active at the "Y" however, served as cultural chairman of the Intermediate Club Council, organized a debating league and a drama festival, and was editor of the Intermediate News. In 1937, I wrote an article on peace and human rights.

Unlike most Jewish children of that era, my first language was English. My maternal Polish-born grandmother, brought up in England, was bilingual in English and Yiddish. My mother and her siblings grew up speaking English. My mother did not learn Yiddish until she got married. My Yiddish speaking father, an orphan, was brought to Canada from Rumania in 1904 by an aunt and uncle who came to Montreal a few years earlier. My Yiddish-speaking maternal grandfather, from Byelorussia, migrated to England and married my grandmother in the late 1890s. They came to Canada with five children in 1909. The social and cultural milieu of my father and grandfather did not extend beyond the Hebrew Sick Benefit Society.

Some of my friends joined Young Judea and some joined the left Labour Zionist youth group Hashomer Hatzair, but I was not attracted to either group. At the "Y" we discussed the Jewish homeland, but since I understood Zionism to mean dedication to the idea of settling in Palestine, I was not drawn to it. I believed that Jews should be able to settle in Palestine if they chose, but did not see this as the solution to the "Jewish problem" for all Jews.

I felt myself strongly Canadian even though I grew up in poverty. At the same time I was always strongly Jewish and learned to speak Yiddish. I learned about anti-Semitism and about fascism's terrible threat to the Jews though I did not feel the sting of anti-Semitism personally. When I became politically aware in my late teens, I was attracted by socialist internationalism, but this did not diminish my interest in Yiddishkeit.

After high school graduation in 1939, I worked in an office and remained active at the "Y". I joined the Journalism Club and learned the craft that led me to become a writer and editor. Rejected for military service on medical grounds, I served on the "Y" War Efforts Committee and on the Youth Council of Canadian Jewish Congress.

In the summer of 1942 our family moved to Toronto, where I worked at several jobs and took a war emergency training course in drafting. In 1943 I was recalled to the army and accepted but by September I was discharged on medical grounds.

I began working as a journalist and in 1946 I became editor of an Anglo-Jewish news service. A year later I became the English editor of the Vochenblat, the Canadian Jewish Weekly. In Toronto, in the left-wing secular Jewish movement, I began to broaden my appreciation of Jewish history, literature, language and culture. The Toronto Jewish Folk Choir was the outstanding Jewish cultural institution I encountered and for which I did some public relations work. My mother sang in the choir, as did my wife, Bertha, who I met in 1944, we married in 1945.

In 1949 I became publisher and editor of the Jewish Western Bulletin in Vancouver, serving until 1960. Then I returned to Montreal to become public relations director for the Jewish Federation. In 1965 I became Western regional director of Canadian Jewish Congress in Winnipeg, serving until 1973. In 1968 I became the founding staff director of the Jewish Historical Society of Western Canada, serving until 1975 and then continuing as a volunteer board member. In 1978 I helped found the Manitoba Association for Rights and Liberties and served as its executive director until 1988, retiring from that position at age 66.

Note: Abe Arnold is the author of Judaism: Myth, Legend, History and Custom, From the Religious to the Secular, and co-author, with artist William Kurelek, of Jewish Life in Canada. He has also been published in numerous other books and publications. In 2001 Abe received an honorary degree from the University of Winnipeg, and in 2003 was appointed a Member of the Order of Canada, receiving the following citation from Governor General Adrienne Clarkson, "Abraham Arnold has contributed immensely to our knowledge of the history of Jewish people in Canada. The author of numerous articles and books, he served as editor and publisher of the Jewish Western Bulletin and as founding director of the Jewish Historical Society of Western Canada. A passionate advocate for human rights, he played a crucial role in establishing the Manitoba Association for Rights and Liberties (MARL), which he guided for a decade. He has also worked to foster intercultural understanding through his participation at conferences and on committees."